Eddie -- I must send this to Angel, he will love it. Too bad he hadn't read this story before spending his long and fruitless day trolling for plankton and getting almost none... it goes on to say the plankton dive deep during the day, so the best "plankton fishing" is at night.

According to the Boating Enyclopedia, the ocean scientist William Beebe said in 1927 that “shipwrecked men in an open boat, if their lot is cast on waters rich in plankton, need never starve to death.” In 1952 Alain Bombard, a French doctor and adventurer, drifted across the Atlantic from Casablanca in a rubber life raft called "L’Heretique" to prove Beebe’s point. He lived exclusively on fish he caught and on plankton “soup” he trawled with a fine-mesh net.

Well, after some years of spending long days--and nights-- at sea in an open boat, I can say that I read this plankton blog with great interest. Whales have very smelly breath but I imagine they didn't have the advantage of aborio. Or for that matter, Angel.

A splendid description. I love your writing. I think I would laugh a lot on a Spanish Journey.

my wife took me to aponiente for my birthday last summer. the most exquisite food i can recall tasting. we had the degustacion (tasting) menu - nine or ten dishes and every one a visual feast, only bettered by the taste. the restaurant is only open in the summer and now that ferran adria has closed el bulli for two years (from 2011), i hope angle gets the recognition he deserves. i'll be back when he opens his doors in the late spring. 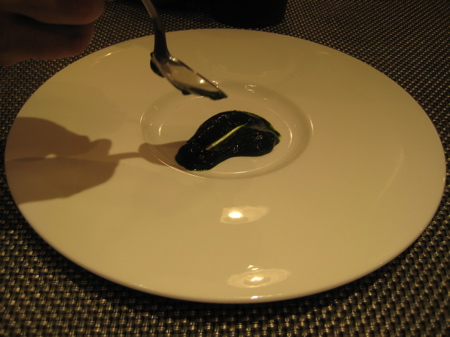 "I always wanted to eat plankton," said Angel León, beginning the story of one of his culinary affairs. He seemed too sweet to be a chef, especially one of Spain's most inventive ones. "When I was young," he went on, "I remember they told us all about how whales feast on it." He looked hopefully across the room full of cooks and students who gathered to hear him last Thursday at the French Culinary Institute in New York City. "I mean, it always seemed to me it would be kind of like eating life itself — primordial."

León grew up in Cádiz, the faded-gold southern Spanish port that sits right where the Atlantic and the Mediterranean meet. And he grew up fishing. But you know how fishermen are -- it would take him a while to find other gaditanos interested in going out after something so tiny and unimpressive. Then there was the problem of finding a net fine enough to pull this nearly invisible fish food out of the ocean. Eventually, León got a few friends to join his quest, and he persuaded a university biologist to give him some sort of scientific cheesecloth they use to measure plankton density. The day came for his plankton expedition. After hours of trolling, they came back to shore with exactly two grams of the stuff. Plankton are really really small.

It took two more years, but León is now a plankton farmer, growing his own and harvesting it every three months from his swimming-pool-sized vat of autoclaved seawater. He brought a whole bowl full of green powder to New York last week. "This is freeze-dried," he said. "At home, we use it fresh." When he says "at home," he means at his restaurant, Aponiente, in el Puerto de Santa María, about 20 minutes outside Cádiz. "My love of fishing came first," he said, "and one passion led to another."

But he was working as a chef during his plankton-pursuing years and before that, too, when he spent some time on commercial fishing boats. What he learned there — that about three quarters of what is caught is nameless by-catch that is dumped, mostly dead or damaged — has had a huge impact on his cooking. Now he's on a mission: to give those unknown fish a name and to put them on our plates. Plankton, it turns out, fit into that scheme. Plankton are very very green.

At his French Culinary Institute talk, the chef mixed plankton, mineral water, a pinch of salt, and just enough xanthan gum to make a syrupy paste. When you're dealing with a food that looks like spirulina, maybe it's inevitable that you end up saying things like "Plankton has 30 times more omega-3s than olive oil." León said these things and added, "I'm working on making a plankton-based baby food."

Wait a minute, we're at the FCI, and Dan Barber, who knows when a thing tastes good, introduced this man. I'm working as his interpreter and am trying to focus, but I am starting to be distracted by worries about the f-word. He hasn't mentioned what all these virtuous nutrients add up to, flavor-wise. "Luckily," chef León said (and now he used the Spanish word for a Cupid's arrow of desire — for being lovestruck), "that plankton flechazo that struck me so long ago was a good thing." He passed around a glass of his primordial soup: it tasted like the sea in that juicy, creamy way that oysters do. And that means León can bring the plankton into traditional Spanish cooking in roles ordinarily played by expensive and overfished species.

He talked about how he blends it into bechamél for croquettes and uses it to make "instant" fumet. He poured a little cold plankton sauce into a wide bowl ("Maybe the biggest problem with this is really its name," he digressed), placed a few oysters on top ("I bought these here in New York, but at home I would use a more humble clam, something with a nice texture but without the flavor of an oyster — the plankton is flavorful enough"), then garnished the plate with a little pretend seafoam made of beaten egg whites flavored with zested lemon rind ("A classic complement to seafood"). "Emotionally," he said "I feel this is just a very essential expression of the ocean."

It looked surreal, like a close-up from a National Geographic article about beaches. Warm, he said, the plankton has a more "commercial" flavor, by which he meant less pungent, something more familiar to diners. He stepped up to the big casserole he'd had on the back burner all that time; in it was a base for an arróz (paella is just one category of Spain's many arroces -- rices). But this base was plainer than usual, nothing but chopped onions simmered in olive oil. No fancy, expensive, or threatened shellfish in sight. In went the rice (in this case Arborio, but en casa it would be Bomba), then plain fumet. Taking it off the fire, he stirred a big dollop of plankton into the finished rice with a warning: "You don't want to really cook this paste — it's very high in protein and it will coagulate," and doled out plates for tasting.