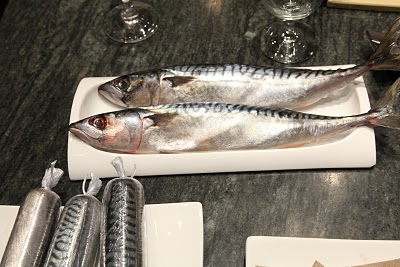 "Oceans cover seventy-five percent of the planet and yet we eat like there are only about 20 kinds of fish out there." That's Angel León again, talking at the French Culinary Institute in New York last month. He had a couple of mackerel in front of him--not an obscure "nameless" fish like the ones he coddles at Aponiente, his restaurant in el Puerto de Santa María (Cádiz), but one of the only small bluefish he could find in markets here. The fish was fresh and firm and he'd filleted it neatly; as he talked, he put the two fillets together again, gently pressing and smoothing them into a mackerel-shaped whole.

"One thing about a lot of the fish trashed at sea," León said, "is that it is small. In thinking about how to use the smaller fish, I took some inspiration from, well," he smiled sweetly, "fish fingers." León pulled out a few mackerels he had reconstructed earlier, each one plastic-wrapped into a perfectly round fish-loin-shaped tube. He sliced one to present in the guise of a sushi roll, nori-colored skin on the outside, pale fish within. Next, he stoked his little countertop barbecue grill. "This charcoal is made of something we have a lot of in Spain," he said, revving up a smoldering pile of olive pits with a blast from his portable hair dryer. 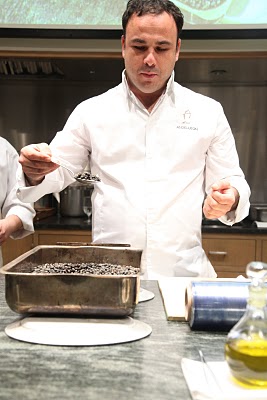 "What's great about olive pits," he added, "is that you can get them really hot--it's easy to take them up to 600 C." (That's 1112 degrees F.) For the moment, he settled on a slower fire, 200 C (about 400 F), unwrapped another boneless mackerel, brushed it with a little olive oil, and put it on the grill. "You want crackling skin, but you also want the fish to gently confit," León said, "to take on flavor from the oil but also from the olive pit smoke, flavor something reminiscent of olive trees themselves." 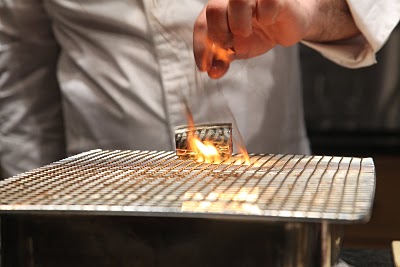 Unless you live near an olive grove, you're going to have to make quite a few martinis to collect enough pits for this kind of barbecue. One ambitious New Yorker in the audience asked about the dynamics of lighting the pits. Not easy, it turns out, until the pits have been carbonized as in the oxygen-deprived burning process that turns wood into charcoal. Best to wait until León adds ready-to-burn olive-pit charcoal to his roster of products for export.

León is one of those chefs with product ideas in the works. But his are no mere Food Flippin' Mario Batali Tin Wind-up toys. There's that plankton he's farming, for one thing. And the Clarimax, his de-fatting gizmo that puts fossilized diatomaceous marine algae to work in the service of crystal-clear stocks. At the FCI, he unveiled a yet-to-be-named instant bottle chiller. These are things that are getting attention from chefs and sommeliers now, but won't likely change things for ordinary cooks anytime soon.

It seems to me that for all of us, León's re-fashioned mackerel is the invention that matters most. After spending time on commercial fishing vessels watching quantities of dead by-catch dumped at sea, León decided simply to stop serving big-name fish at his restaurant. "Why do we think the only kind of tuna worth eating is sashimi-grade loin?" he asked. "In Cádiz, where I grew up, we could feed a family on a rice with meat scraps from one tuna bone. Heads are full of meat. We need to learn to cook this way again, to take advantage of the whole fish."

A few days after his FCI talk, León prepared a blowout seven-course feast with Dan Barber at Blue Hill at Stone Barns. Barber excused what appeared to be various eating-high-on-the-tuna sins on our plates: The caviar atop the Ibérico consommé was American paddlefish roe. The lubina (sea bass) was sourced at Veta la Palma, far away, yes, but an ingeniously designed environmentally friendly fish farm at the edge of the Doñana wildlife reserve in southern Spain. "Sooner or later," says León, "we're going to have to discover the fish that have not been glamorized by marketing. Big beautiful cuts of tuna loin and all of rest of the fish we see on menus now will be gone."

Back at the French Culinary Institute, León asked that the lights be turned down. "I brought a little video. I hope you don't mind," he said, not preparing us for the violent scene that came next: Andalusian fishermen balanced on the edges of their boats, sweating, yelling, working the underwater mazes of the almadraba. The water is roiled with waves of fighting tuna, captured as they swim from the Atlantic through the Straits of Gibraltar to spawn in the Mediterranean. "We have to try to save this kind of fishing," León said after the film clip ended. There was an awkward silence. I read later that almadraba means battleground in Andalusí (Andalusian Arabic of the early middle ages). How could a bloody man-on-fish battle like this be something to save? León's explanation: because it is historic.

"The almadraba is a way of life dating back to the Phoenicians and after them to the Romans in Cádiz." His real point: because it is sustainable. "That long history is possible because we had it figured out over two thousand years ago: enough fish get through to produce the next generation." The almadraba is seasonal. Because the tuna are culled live, this is a one-at-a-time confrontation that produces no by-catch. And, most important to a fisherman like León, it involves chance, and therefore is ethical hunting. "Había suerte?--Any luck? This has always been the question asked of returning fishermen," he explains.

High-tech fishing that has eliminated the concept of luck and the reality of mutual struggle is, in León's view, what's got us into this mess. "The kind of fishing that should scare us doesn't because it's done at a remove from the sacrifice. It's carried out with helicopters and radar. The fish can be hunted down anywhere--that's the kind of fishing that must be stopped."

It was time to go, but Angel León had one more thing to show off. He dug into his pocket and pulled out a thick brown coin. "A friend gave me this coin," he said, "It was found in Cádiz, but it's Phoenician. See here? Stamped on it are two tunas. That is how important the tuna were then. I carry it with me always." Please don't flash that thing on the street in New York. And don't show it to the full-body scanners over at TSA on your way back to Spain. Oh, Angel, I hope those tuna are still in your hands.

About the photos in this entry: these were taken by a talented photographer at Angel León's seminar at the FCI and are posted at their blog, The Hot Plate. They are indeed, "hot," I'd love to hear back from someone at the FCI for proper credit.