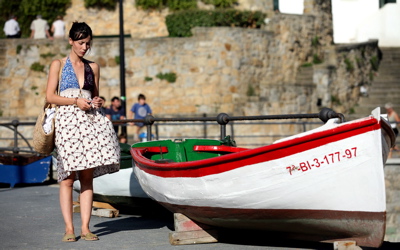 The Guggenheim museum in Bilbao is still a thrill. But because of that it’s hard for the city itself to get the buzz it deserves.

“Maybe it’s just as well,” says my Bilbaina friend Carmen. “At least Felipe and I can always get a table here.”

Carmen was sipping a coffee on the terrace of her favorite asador (a grill—the Basques are big on cooking with fire). There were sweeping views of the city—tile roofs, glass towers, and green hills—just behind her. We had put away more than our fair share of juicy mushrooms, sweet grilled peppers, and perfectly rare ribeyes. The restaurant was busy. But not buzzy.

I was humbled. In a country bright with Michelin stars, this asador didn’t have one. I hadn’t read about it in any magazine. But it was very, very good.

This is where it dawned on me that Bilbao is a great place to live.

And why wouldn’t it be? It’s a city with an adventurous and industrious past. The people here started mining iron in the middle ages and ran a fishing empire even before that. It’s been a university town since the 1800s. Obviously there was something to this place before the Guggenheim came along in 1997.

I knew Carmen didn’t really mean it about wanting Bilbao to stay undiscovered. She has her own boutique travel company in town—she’s my go-to local expert in the Basque Country. And she loved surprising me with that asador experience.

She promised to show me more of her best beyond-the-Guggenheim secrets.

Bilbao being compact and walkable, the first thing, naturally, was browsing shoes. We met in her elegant 19th century Ensanche neighborhood, on the streets around Plaza Moyua. Red suede oxfords called out to me from Lottusse—they’re hand-sewn in Mallorca. I’m not sure she liked them, but Carmen endorsed them in her practical Basque way: “They’ll last forever.”

Next thing you know we were at Pastelería Arrese (est. 1852), sampling a chocolate truffle.

“I also love Pastelería Martina de Zuricalday,” says Carmen. “It’s the oldest pastry shop in Bilbao, founded in 1830.” Her advice on what to get there: the bollo de mantequilla—a perfect little brioche oval filled with whipped sweet butter.

Here is just some of the other off-tour places Carmen showed me, pared down to my top ten, on a loop that starts in the 19th century Ensanche, zig-zags into the historic Parte Vieja, and includes a jaunt—or if there’s time, a daytrip—to the sea.

Here’s what I really like best about Bilbao: it’s a city where people are as comfortable with their old-school pintxos bars as they are with their shiny titanium museum. It’s hospitable without being showy.

What about that asador? I’m not telling how to find it. Not right here, anyway. But when a Bilbaina says, nonchalantly, “There’s this place up the hill—I think you might like it,” follow her.