This post should be taught in schools!!! We have no need of Starbucks here... at all! And BTW, thanks a lot for including me in your blogroll. 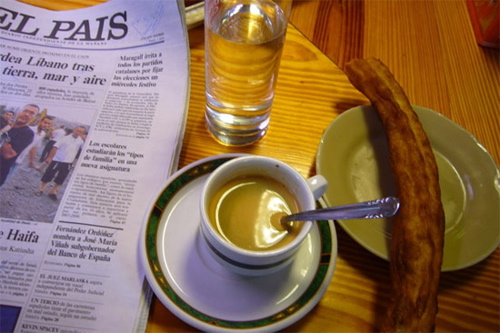 I don't really know Alberto Romero but thanks to the Internet, I have seen what he has for breakfast and I love him for his dedication to one of Spain's perfect meals: a little crema-topped café with a glass of water back, olive-oily bites of crunchy fried dough in the form of a churro (or a puffier porra, since he's in Madrid), and that excellent newspaper, El País. Thanks, Alberto, for the photo above.

I rejoice when I hear that Starbucks has overextended itself and may have to close a few stores. As if that sameness they bring to city streetscapes weren't tiresome enough, the coffee—ordinary beans, overroasted—just isn't that good. And it gets my goat that the megachain has made inroads in Spain, where a well-priced, very good cup of coffee, served up quickly enough to make takeout seem like a waste of effort, is a long-established tradition. Walk into any decent bar here and order a café con leche. You get a nice, dark, crema-covered shot with freshly steamed milk for maybe a Euro twenty-five. {C}

If, like Alberto, you are not late for work, throw in a slice of toast with tomato (una tostada con tomate), a bite of omelet (un pincho de tortilla), or that porra, and linger for a whole five minutes. The point is, in the same time it takes you to get your "to go" order at Starbucks, you can stand at the counter and have your coffee made-to-order, spend a moment savoring it and reviewing news headlines, and be on your way.

Then there's this: if you buck Starbucks, you get to drink your coffee out of a real cup instead of paper. Unless of course you're one of those people who insist on having their coffee served in a glass (en un vaso, por favor). Alberto drinks his coffee solo but his girlfriend, a café con leche woman, explains the glass permits the addition of a little extra milk. In Spain, your coffee need not match some pre-programmed corporate coffee drink profile. Ask for your coffee shorter and stronger (corto), or longer (largo) and while you're at it, say whether you want your milk heated very hot and frothy (muy caliente) or just lukewarm (templada) or, maybe because you're late for work, cold (fría). Coffee with just a little milk foam is un cortado. A plain old espresso is un café solo, though you are welcome to get your hit of coffee spiked with a shot of brandy (un carajillo—for which you may also specify whisky or anís). If you must have something like a drip brew, long and watery, order an americano. Decaffeinated beans brewed properly in an espresso machine (un descafeinado de máquina) have, in swankier bars, replaced the dreaded envelopes of instant coffee decaf drinkers were once given. A glass of water alongside your Joe is customary, but as Alberto points out, it is also customary for waiters to forget to serve it, so if you want water, ask: y un vasito de agua también, por favor.

Have it your way, with one exception. Do not order a milky coffee after mid-day, and most especially not after a big lunch or dinner. If you order a café con leche after, say, 11:00am, a seasoned barman will serve your coffee in a cup, knowing you won't want to fill up on milk so close to the lunch hour (which comes around 2:00pm). This has to do with the Spaniards' ceaseless worry about things that will give you a corte de digestión. They care about this the way the French care about their livers. And maybe they're right. You wouldn't want your digestion cut off, would you?

More musings on a proper breakfast, on why waiters forget to bring water, and how that relates to what we get and pay for in the online realm can be found on Alberto's blog.