A nice Xmas in Catalonia wouldn't be so without the presence at any home, in any naivity of the little shitting man (El Caganer)...I know, and understand, that it may be a little disgusting for you foreigners when you first hear about it, but for us, catalan people, it's a very popular and loved figure even though we don't really know about its origin.
If you decide to come to Barcelona these next holidays don't forget to go to the traditional market in front of the cathedral, in the gothic quarter. Once there, you'll se a little stand where many different shitting men are sold...Just check their website (www.caganer.com) and you'll have fun...Obama, Hillary Clinton or even the soccer player Messi have been turned into shitting men...
Bon Nadal per a tothom!!! (Merry Xmas to everybody!!!)

I heartily approve of the Catalans' fondness for the little shitter, but I do think their taste in music is rather crappy.

Eddie, I cannot believe you don't like that tender song!

Our taste in music isn't crappy, that song is just for us to laugh a little. 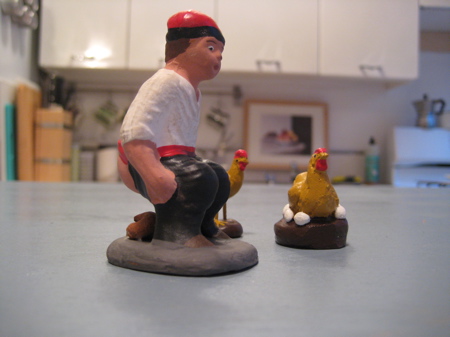 Some of you (especially readers around age two) may have felt drawn to the little guy peeking out from behind the pile of mantecados I wrote about last week. He's my favorite caganer, a traditional rendition of the Catalan shitting man. He takes his place in all Catalan nativity scenes (even the ones in churches) to remind you of your humanity.

Here's what it's all about: no matter what kind of miracles may be going on around you, the arrival of kings and gods and so on, there you are, you and the call of nature, somewhere behind the manger. I've noticed some of you don't quite believe my annual claims about the importance of this tradition in Catalonia, though I'm glad at least a few of you are as charmed by it as I am.

Either way, here's a link to this year's Catalan Christmas hit, 'El Caganer,' in which pop stars Albert Pla, Joan Miquel Oliver, Gerard Quintana, Estopa, and Quimi Portet i Manel wax nostalgic about what makes for the perfect nativity scene: "There's Mary and Joseph, the three kings, shepherds and sheep, a little old lady roasting chestnuts... and above all, there's gotta be a caganer." 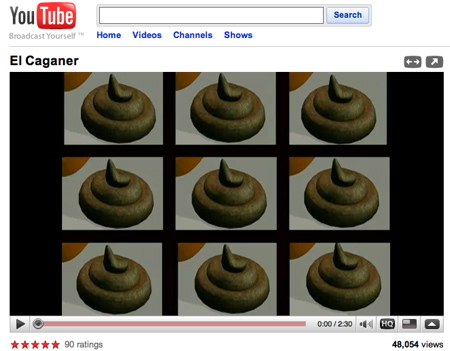