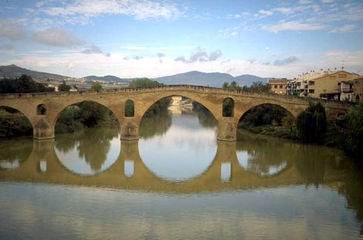 How convenient that the Camino de Santiago cuts right through the Rioja wine country.

Puente la Reina points us in just the right direction. This is where the routes from Paris and Toulouse converge and become what’s known as the Camino Francés—the French Way. The bridge here is Romanesque. Which means 11th century designers figured out the magic of those reflected semi-circles.

This bridge was built for you, Caminante.

The town isn’t built around a castle. Instead it’s more of a medieval mall concept: the main street, Rúa Mayor, is the Camino, leading you past churches and shops before putting you on the bridge. Alfonso I, king of Navarre, designed it this way to attract Camino traffic and commerce in the 11th century. The goal was for Navarre to get settlers (they’d have been Franks) to beef up a sleepy Basque wheat-farming settlement and push back the northern expansion of Moorish rule.

Here’s one of those places where you realize this whole story of the Camino is not just a spiritual one, but also one of political interests, immigration issues, developer power plays, and tourism opportunists. Still, what they left behind is beautiful.

If you’re the kind of person who notices language, you’ll wonder what Queen the bridge is named for (Puente la Reina translates as Queen’s Bridge). There probably wasn’t a queen involved, historians say: the words are derived from the Latin Pons Runa—bridge over the Runa river, which was an earlier name for the river now known as the Arga.

Beyond the bridge, the earth becomes red and clay-like, drier than it was up near the Basque coast. Rocky, with patches of vineyards.

Farther into the Rioja wine country, the landscape is dotted with winery towns. And LaGuardia (called Guardia by Basque speakers, and lately by most everyone) is a one of the best preserved. It is in the heart of the Alavesa—one of the three geographies of the Rioja wine region (the other two are the Alta and Baja). As far as political boundaries go, it’s in the Basque Country.

The soils are poor here, which is how grape growers want it. The Sierra Cantabria stands at the northern boundary of the Alavesa, so the vineyards are arrayed on its south-facing side. They get a lot of sunshine, but the air is Atlantic-cooled and at a higher altitude than what we passed in Navarra.

Reds are the focus here, 85% of what’s grown in the d.o.c. (denominación de orígen calificada, an official wine designation for a particular terrain and its winemaking rules), though there are some nice whites to be had. Tempranillo is the dominant varietal. The d.o.c. permits blending it with native graciano, with mazuelo (aka carignan), and with garnacha.

Grape growing and winemaking go way back in Rioja Alavesa, at least to Roman times. But Guardia wasn’t founded as a wine town. It was established in 908 as a fortress town, to guard the kingdom of Navarre. It is walled and stony. And riddled with ancient caves, dug so townspeople could hide from battles or escape sieges.

“Then,” as one local winery brochure puts it, “about 250 years ago, it was noticed by the inhabitants that these conditions were perfect for storing wine.”

That history explains why the rules of aging became so important to the art of winemaking in Rioja. Crianza reds are aged for two years, with at least six months on oak. Reservas are aged for at least three years, with one on oak. And Gran Reservas, selected only in especially good vintages, require at least five years of aging, 18 months of which must be on oak, plus a minimum of 36 months in the bottle. When you’re in this wine country and you hear a wine referred to simply as Rioja that means it’s a young wine.

Even if all those rules seems hard to get, it’s not hard to understand that handling wine in this very slow way results in flavors other than fruits—a kind of earthiness, and the vanilla aromas of American oak. It also means there’s a lot of money tied up in bottles sitting in caves around here. I think of that when I read articles about how some Rioja wineries have sold out to more international varietals and styles. It must be hard not to.

Though you definitely hear a lot about wineries gaining renewed dedication to tradition and terroir. Bodegas Primicia is one of those. The bodega is right outside the walls of Guardia and dates to the 11th century. It is the oldest non-church building in the town, though its history is linked to the church. “Primicia” was essentially a tax term—whereby a percentage of local farmers' produce was given to the church. Primicia is one of many wineries in the Alavesa that can show you its underground caves.

It’s hard to get a vantage point on the whole of Guardia at once. But tourist offices have their ways.

So here it is, a medieval hilltown surrounded by golden vineyards against a gray mountain backstop—picture perfect Guardia. 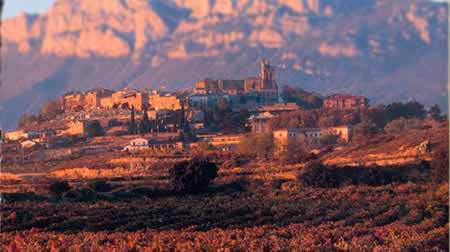