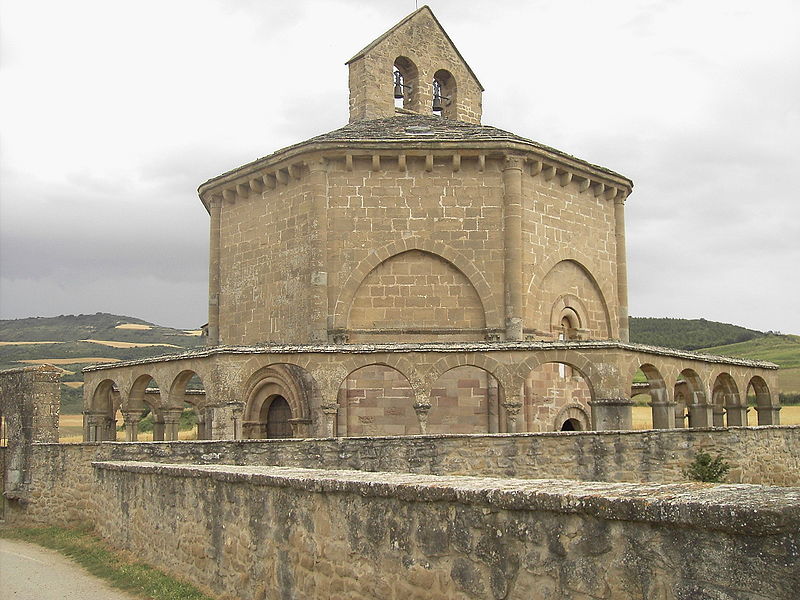 This fall, we'll be making the first countryside walk of our Camino from Santa María de Eunate.

My past walks have not taken me here, so I've been reading up. Considered one of the loveliest and most evocative churches on the Pilgrim's Way to Santiago de Compostela, the church at Eunate stands in solitude on a flat, open landscape. Although the fields may look parched by autumn, they are striking in summer—guidebook pictures show the church surrounded by sunflowers.

The church is late Romanesque, built in the 12th century (1170), with the simple, round, Roman-like arches of that period. It is octagonal, as is the Church of the Holy Sepulchre in Jerusalem. That shape and some geometric details inside the temple show that Moorish style and craftsmanship made it this deep into northern Spain.

And it is surrounded by its cloister, rather than enclosing an inner courtyard.

The church’s rare form has given this place a certain mystique. The fact that such a beautiful church stands on its own, not in a village, adds to the enigma. Anyway, for whatever reason, there isn’t complete agreement about its origins.

The only well-documented history of the church is as a gathering point for a spring romería—a kind of medieval pilgrimage to a sanctuary—for people from all around the surrounding valley.

Popular legend has it the place was built as a tomb for a Navarran queen. There are records of later medieval burials here, but nothing definitive about a more ancient one of such importance.

Early historians decided the church was built by the Knights Templars, but that theory has been discarded because those knights did not actually have a presence in this area. There was another crusading group, the Order of St. John, who historians now think might have established this place as a hospital on the Camino.

What is certain is that the church has always played an important role on the Way.

It is in an important location, for one thing, just outside Puente la Reina, where two main routes from France converge into one—now known as the Camino Francés.

The church’s lantern-shaped roof turret was likely lit with oil lamps to serve as a kind of beacon for travelers walking at night.

Tombs discovered beneath the columns have revealed that people were buried here with scallop shells. So the church must have indeed served as a Pilgrims’ hospital. (These “hospitals” were more what we would call hospices and funeral chapels—few were cured in them).

The church’s octagonal vault is held up by eight ribs with different angles—I like to imagine it inspired Frank Gehry when he made his first sketches of the Guggenheim: the eight sides of the church are all different. Inside the octagonal exterior is a pentagonal apse (where the altar is), where the oldest sculptural elements of the church are found.

There is a small square walled tower on one side—possibly built to provide access to the rooftop light. Openwork and windows—these would have been set with alabaster, not glass—alternate along the exterior walls, and there are two doors: the north one highly decorated, facing the road to Santiago.

The name of this place is worth reflecting on. Eunate in the Basque language translates as “one hundred doors,” which doesn’t add up exactly: the church is encircled by a gallery of 33 arches with decorative capitals. It is possible that the original name of the church was more correctly Onate, which would translate as something like “the good door” or “the right gate.” Which makes this seem like a good place to start our journey.

More about this church at www.santamariaeunate.es