The Camino de Santiago trip sounds fabulous. We need more indulgences, just to keep up. But I really want a relic. Some finger bones, perhaps?

Meanwhile, on the subject of enchantment, check out this wine: the 2005 Embruix from Vall Llach. Here's the write up from Gordon's http://www.gordonswine.com/main.asp?request=ARTICLES&amp;article=42&amp;. 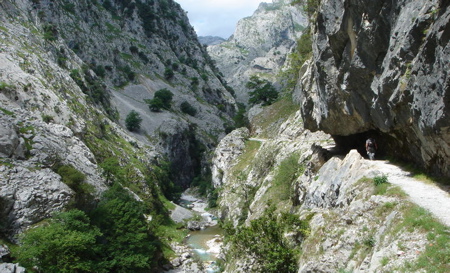 I'm working on creating a walking and eating route across northern Spain -- the drizzly part of the country travel marketers call Green Spain. I realize the pairing of drizzle and green may not sound all that exciting, but we're going in September, close to grape harvest time, so we can take advantage of the fact that entire villages will be praying for good weather.

Anyway, there are enough intriguing pairings to be found along the Camino de Santiago (the Way of St. James, the ancient pilgrimage to Santiago de Compostela in the northwest corner of Spain) to make braving the mist seem worthwhile: scallops and albariño, white bean stew and bubbly hard cider, tapas of octopus and pimientos de padrón, mountains and cave-aged cheeses, stories of forest gnomes and songs of bagpipes, Javier Bardem and Oviedo.

About those scallops: they are one of the wonders of Galicia's coast. And I'm not alone in thinking of albariño, the crisp white wine from the d.o. Rias Baixas in Galicia, as their perfect companion. These wines usually suggest citrus and a whiff of melon or peach, though they finish dry. When you picture the region's granite terrain and imagine its salty sea breezes you start noticing their minerality or even a salty note, more present in some albariños than in others.

Last night called for albariño and a springy treatment of scallops, like this: 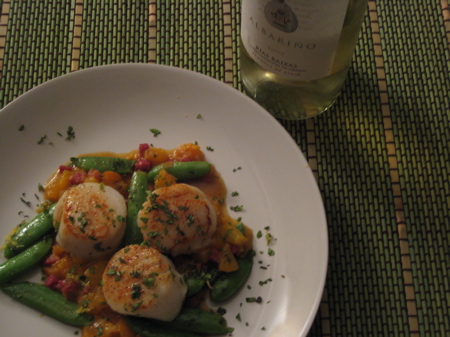 Place the minced shallot in a small saucepan with the wine and simmer to reduce by about half.

While the wine reduces, cut up the pancetta, rinse the peas, pit and chop the apricots, zest the lemon rind, and mince the mint. Your wine is probably reduced enough by now, so turn it off.

Sauté the pancetta in a medium hot skillet until crispy, remove the pancetta and set it aside. Wipe out the pan sauté the peas in it, with a drizzle of olive oil, then remove them and set them aside.

In the same pan, sear the scallops – salt them lightly and remember they don’t need much time, a minute or so on each side to caramelize and firm them up a bit. Remove the scallops and deglaze the pan with the shallot-studded wine, swirl in the butter (or not, it just makes the sauce lovelier), then throw the scallops, pancetta, peas, and apricots all into the pan to coat them with the sauce.

Plate the apricots, peas, pancetta, then the scallops and any remaining sauce, then sprinkle the plate with zest and mint.

Some people feel the scallop should be more properly paired with Santiago. The scallop shell is the symbol of the Camino, or at least the Christian version of the pilgrimage.

I've found two stories about why: The Apostle James, one version goes, did a little evangelizing among the Celts on the Iberian peninsula. On vacation, I guess, back in Jerusalem in 44A.D., Agrippa thanked him for his efforts by beheading him. Going down as a martyr disqualified James from a decent burial, so his buddies (or some say a bevy of angels) put him on a raft and set him out to sea. Next thing you know, the raft turns up on the Galician shore. Or at least so said the witness, a hermit named Pelayo, who, it must be said, also reported seeing a field of stars shimmering at the scene (Campostellae). Here's the thing: the body of James was covered in scallop shells, but in really good shape, considering it had been out at sea for more than 700 years (think about this next time you consider cryonics).

Another explanation for why the image of scallop shells is so frequently found along the Camino is that scallops just happen to be one of the great foods of the Galician coast. And they must have been plentiful back in the early days of pilgrimages. So picture this: humble penitents and seekers making their way to Santiago gobbled them alongside wild chestnuts and whatever else they could lay their hands on for sustenance. Plus, the empty shells came in handy as bowls and spoons.