It's worth noting that this coca was a huge hit with the grandchildren--no big surprise, given that it combines their two favorite foods, sugar and bacon. 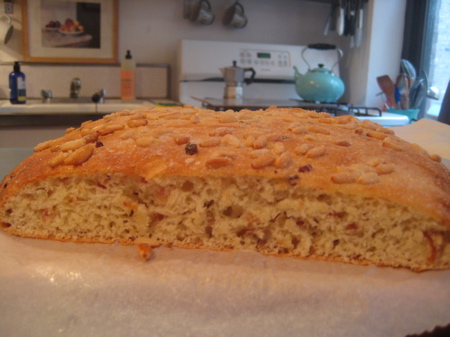 I hear that in France people settle for just one day to celebrate fat: Mardi Gras, that happy Tuesday before Lent and all its pious negation begin.

In Catalonia, the fat-eating starts almost a week ahead of time, on Fat Thursday. First thing in the morning on Dijous Gras, they reach for a slice of coca de greixons to get the ball rolling.

"Ooh-la-la," say the French, when you tell them the other name for this barely sweet, mysteriously savory breakfast flatbread,coca de llardons. Yes, those little bits in the dough are, well, they are not exactly lard. They're bacon. 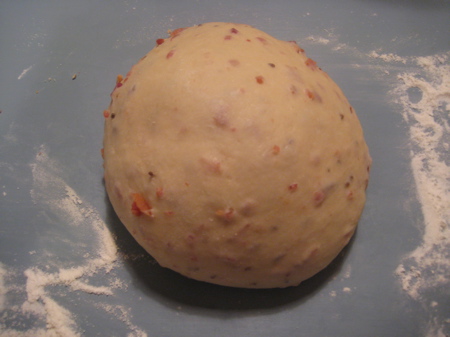 Coca de greixons is a simple one-rise brioche dough. The butter and eggs are dialed back a notch to compensate for the other gras, which you've slowly crisped so that it practically amounts to lean cuisine anyway. Roll it out into the traditional oblong coca shape, paint it with olive oil, and give it a scattering of sugar and pine nuts for crunch, and voila! Or, as I believe I said at my first confession: Je regrette rien.

This is one of those rare breads for which a sturdy stand mixer comes in really handy. If you have one, you let the dough go for a good five minutes while you clean up the kitchen or make a phone call. If you don't have one, be ready to spend about 10 minutes kneading a very sticky dough.

Warm the milk. Make sure it is not too hot (about 110F is just right. At 120F or more, you'll kill the yeast––if you don't have an instant-read thermometer, stick your finger into the milk and aim for hot-but-tolerable; later, go and spend the $7 on a thermometer), then sprinkle the yeast over the milk and let it begin to dissolve and activate while you start the dough.

Put the flour, sugar, salt, and anise seeds into a mixing bowl, and give it a whirl using the mixer's paddle attachment. Drop in the butter and beat the mixture for a few minutes, until the butter is well distributed and things have a sandy texture.

Change out the paddle attachment for the dough hook. Beat in the milk and yeast slurry on low speed, then add the egg and the anís liqueur, if you're using it, and beat them in, too.

Bring the speed up to medium and let the mixer go for a good five or six minutes. Add the chopped greixons* and mix or knead them in well, for a minute or two.

The dough will look rather wet, but scrape it out of the bowl onto your lightly floured countertop and you'll see it holds together in a supple, elastic way.

Knead the dough gently, giving it just a few turns and shaping it into a smooth ball. Smear on a little olive oil to coat the dough's surface, cover it lightly with a clean floursack towel or plastic wrap, and set it aside to rest for a half hour.

Roll the dough into a big oval or circle, aiming to get it a little under an inch thick.

Line a baking sheet with a piece of parchment paper and lift the dough onto it. Spruce up the coca's shape after the move. Brush the top with one tablespoon of olive oil, then sprinkle it with the pine nuts, smoothing over them gently with your hand to be sure they'll stay put.

Let the coca rise. It needs about one and a half hours at warm room temperature.

Heat the oven to 350F. Brush the top of the coca with another tablespoon of olive oil and sprinkle it with the two tablespoons of sugar.

When making this for breakfast, I've prepared the dough and just let it rise overnight, no problem. You can also let it rise, then refrigerate it for a day or overnight to hold it until you're ready to bake it; just get it out of the fridge when you first get up, before you even begin preheating the oven.

* Greixons, llardons, let's face it, these are bacon bits. Homemade. From good pancetta or very thick cut bacon (uncured, nothing smoked, nor mapled, herbed, peppered...). A half pound cut into cubes or 3/4 inch sticks will yield about the half cup you need for this recipe. (If you make extra, it'll freeze.)

Cook the bacon over low heat, stirring frequently. You want it evenly rendered and caramelized. You'll end up with at least a half cup of bacon fat as a handy by-product. 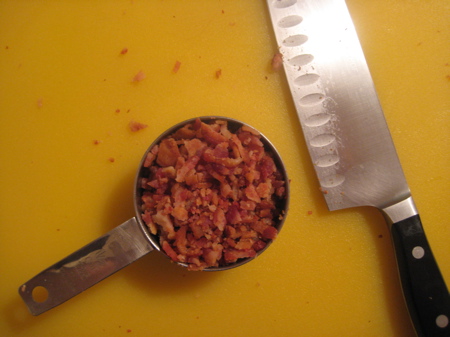