mmmm! Yum, I am going to have to make this, it's very hard to find membrillo here in Kansas, and I love it with manchego rinds and wine! xo Miss you! Jen

I love Quince paste myself is a great accompaniment for Cheeses and Wine.
The flavor with the Covadonga Blue cheese and quince paste is a perfect combination.
Please come and visit us on www.foodspain101.com for pairings and more.

Let's grow our own... I think they'd do well in Kansas and maybe could be babied along with lots of manure on my Cape Cod sand. 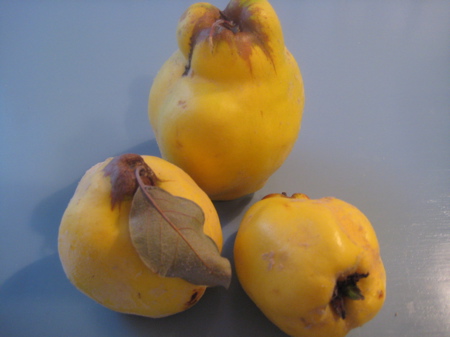 Back in New York this week, but comforted by quinces at the Union Square Greenmarket. I felt a little sorry for them, bitter, lumpy things, and took some home with me. Well, they rolled out of that bag in a cloud of their own perfume, asking who was feeling sorry for whom. They smelled like lemon. Or over-ripe pear. Wrigley's Juicy Fruit in the flesh.

My plan had been to cook them down into codonyat, the Catalan quince gelée that is so perfect with cheese. But now all I wanted was to have them near me. Sniff them. Run my hands over their fuzzy backs.

I turned to the Internet for help. I learned that having these feelings towards quinces is nothing to be ashamed of. They are practically the original forbidden fruit—or at least the one Paris pitched to Aphrodite. They're the golden apples of the Song of Songs. Ancient Romans scented rooms with them for lovers' visits. Modern Madrileños stow them in their closets, where they go toe to toe against smelly shoes.

Jeff Koehler wrote about all of this in the literary magazine Tin House. His recipe for a spoonable codonyat snapped me out of my love-struck stupor: quinces should be eaten, after all. But I like the firm, sliceable kind, so I searched on.

The rules for getting quinces, sugar, and a little lemon to turn into codonyat are contradictory: The fruit should be peeled, or not. The seeds give the gelée its burnished color, or they don't. Just the lemon rind or the whole lemon. Blender or Thermomix. And if you're Spanish, you might throw in a little piece of cinnamon stick and call it membrillo.

In the end, I put my trust in the ladies who run El Museu de la Confitura in Torrent d'Empordà. After all, so many beautiful jams come out of their little workshop. 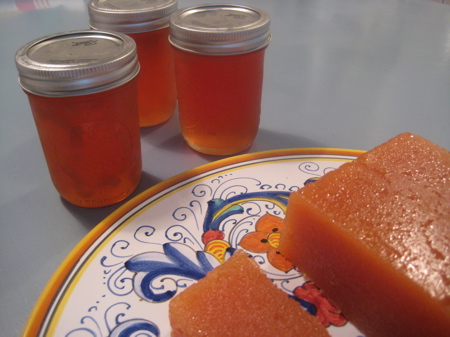 Like most of the recipes I read, theirs follows a two step juice-then-paste process. The upside they offered, which I didn't find anywhere else, was that the effort would yield two finished products: a jelly, made with the strained quince juices, and a gelée or paste made by cooking down the remaining pulp. I'm a jam-eater, but it's nice to have a clear jelly on hand for painting a shiny glaze on apple tarts. I ladled up one jar-full for that purpose.

Trying to channel confiture queen Christine Ferber, I stirred some chopped candied ginger into the pot to spike the other two jars of jelly. Of course, three half pints of sparkling pink grapefruit-colored quince jelly, straight up, might not be such a bad thing.

5 lbs quinces
2 lemons
6 cups water
About 7 cups sugar (you may end up adjusting this, depending on how much juice and pulp your quinces yield)
Two pieces of cheesecloth, about 2 feet square, for bundling the quince cores and straining the juices
A few drops of grapeseed oil (or other mild-flavored oil), for oiling the codonyat mold
Optional: 3 oz. candied ginger (about 1/2 C diced small)

Start with the jelly: Scrub the quinces, rubbing off their sticky fuzz.

Measure the water into a big heavy pot. Slice the lemons into a few wide rounds and drop them into the water.

Trim and quarter the quinces and pare out their cores. Pile the cores and seeds onto a square of cheesecloth as you go. Chop each quince quarter once or twice and drop the chunks into the water with the lemon slices.

Wrap up the cores in the cheesecloth, tying the ends into a firm knot, and add the bundle to the pot. Boil the fruit gently for about 30 minutes, until it is very tender.

While the fruit boils, prepare your jelly jars: wash 3 half-pint jars (four if you're an optimist) and lids, and put the jars on to boil. Put the lids in a small bowl and scoop boiling water over them to cover them.

Line a big strainer with the other square of cheesecloth and set it over a bowl. Pour the quince mixture into the strainer, letting the juices collect in the bowl, but resist the temptation to press on the fruit––you want the juices to be clear, not pulpy.

Measure the juices back into the heavy pot. For every four cups of juice, add three cups of sugar.

Over medium heat, stir to dissolve the sugar, then bring the mixture to a rolling boil and let it cook and reduce for about 20 minutes.

Check the set: the jelly should be syrupy and a drop, dripped on a cold plate, should set up rather than run. If you're adding the chopped candied ginger, stir it in at the end. Skim, ladle into clean, hot half-pint jars, and seal.

For the codonyat: Wash out the big heavy pot. Lightly oil a loaf pan with grapeseed oil.

Remove the lemon slices and the bundle of cores from the pile of cooked quince. Run the fruit through a food mill. (The skins will be left behind.) Puree it back into the bowl to mingle with any leftover juice that has accumulated under the strainer.

Measure the puree into the big pot: for every five cups of quince puree, add four cups of sugar.

Bring the mixture to a slow boil. Keep a careful eye on the codonyat––it will want to stick and it scorches easily, so stir it often as it thickens. 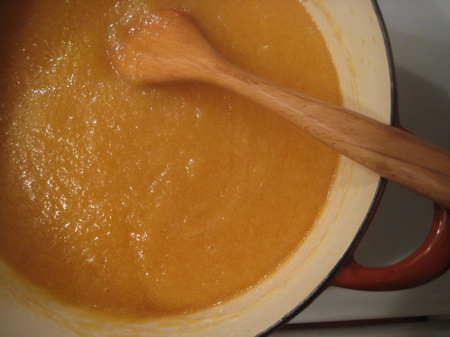 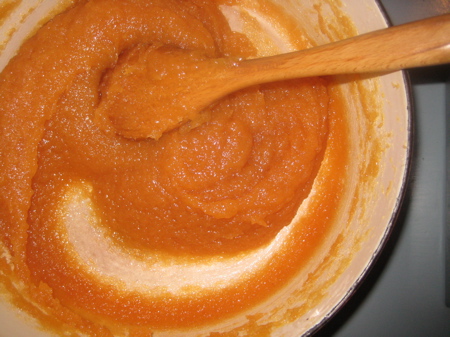 Pour the codonyat into the oiled mold and let it cool a bit. Cover and refrigerate several hours, until completely cold. It will be firmly set; you can unmold it or just cut out thick slabs to slice or cube for serving.