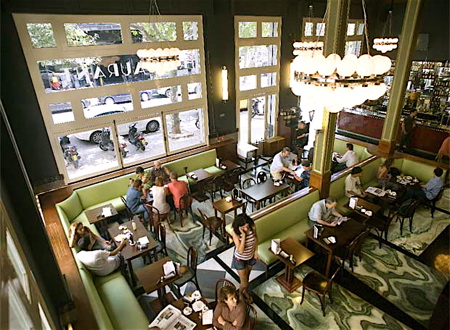 I did some “Rolling Like a Ball” today to warm up for our spring fitness retreat. Then, because Karrie–our Pilates guru on the trip–says balance is important, I started a list of restaurants to scout in Barcelona, before the retreat begins.

Digging into the latest advice from the Boston Globe and the Wall Street Journal made me nervous. I think it might be easier to get into Ferrán Adrià’s course at Harvard than to eat at one of the post-El Bullí enterprises they suggest.

Tickets Bar/La Vida Tapa requires reserving in advance online, with a book that goes out 60 days. Right now, April 10 and 11 are possibilities. Online reservations are a must for a meal at 41 degrees/Experience. Be sure you really mean it, because you’ll pay a nonrefundable 50 Euros per person to reserve. They do apply that 50 Euros toward your total, which will come out somewhere north of 200 Euros per person for the tasting menu, 265 Euros if you want wine.

For real luxury, the Globe suggests an alternative “…simply make the 90-minute drive out of Barcelona for an exquisite meal at El Celler de Can Roca.” You might want to have a look at the restaurant’s website before you rent that car. When I requested a table for clients this fall, the reservationist’s answer was kind. But it still translated as, “Um, no.”

Can Roca is no longer merely a great restaurant with a long history and an intriguing, fast-evolving menu. It is now officially “The Best Restaurant in the World.” It is very good. But I’m not sure I’ll ever get to go again. After El Bullí was named “Best” they reportedly got 2 million requests for reservations each year and granted 7,000 or 0.35% of them.

You need friends in Barcelona at a time like this. I called on two, Bego and Eduard. Both serious eaters, but with different styles. Now these are recommendations that make me want to be in Barcelona again. Without reservations.

Bego Sanchis runs Cook & Taste, one of my go-to stops for anyone wanting a friendly introduction to the Boquería market and the chance to pitch in on making a paella for lunch. She rarely goes out, but when she does, she wants something clever. And a little luxurious, which is not to say fancy.

“Gaig” says Bego. “Es todo un clásico.” I know and love this one and am glad to hear it’s still so good. Chef-owner Carles Gaig grew up in his family’s old-school restaurant, but became an early pioneer. He’s been giving traditional Catalan food a modern spin since the late 1980s. He’s in a new location, and with a menu that allows you to choose the innovative style that won him his Michelin star or dishes in a simpler tradition.
Restaurant Gaig, in the Eixample neighborhood, at Carrer Còrsega, 200. Tel: (011-34) 93-453-20-20. Closed Sunday evenings and Mondays.

Bego also likes Roca Moo. “A low-key way to feel the influence of the brothers Roca,” she says. The brothers behind this place being the same Rocas cooking up the current “Best in the World” mentioned above. Their chef here, Felip Llufriu, has earned one modern, elegant, Catalan Michelin star. Whether you choose the Joan Roca or the classic menu, let them pair your wines–it’s a real strength here. This is a restaurant in a hotel (called the Hotel Omm, get it?), but not a hotel restaurant.
Roca Moo, Hotel Omm, in the Eixample, at Carrer Roselló, 265. Tel: (011-34) 93-445-40-00. Closed Sundays and Mondays.

Bego’s downtown favorite is Dos Palillos. “Rico, rico,” she says. Asian, but not. Nor fusion. “Small bites, inspired by people who eat with sticks,” meaning chopsticks as well as the toothpicks that hold together many of Spain’s tapas and pintxos. Another one that’s in a hotel, but not a hotel restaurant. It fits right into the fun-mod Casa Camper. Like Bego’s other picks, this one also has a Michelin star. Chef Albert Raurich is not just another of the zillions who’ve done a stage at El Bullí. He was there for a decade and became chef de cuisine. More important, he has a real instinct for good food.
Dos Palillos, downtown in the right-of-Ramblas Raval neighborhood at Carrer Elisabets, 11. Tel: (011-34) 93-304-05-13. Closed Sundays and Mondays.

Eduard Cabré Romans is a full-time world-traveling graduate student and sometime freelance guide. Young, yes. But everything about him is smart, including his palate. He goes out a lot, always in search of affordable flavor adventures.

Bar Calders, Eduard says, is his top favorite right now. This place is beloved for its way with el vermut–the classic Catalan pre-Sunday-dinner-at-Mom’s drink and snack ritual that’s hipster-cool in the city right now. Since its chef is also a painter who has studied meditation in India and the U.S., it’s not surprising that things like hummus make the mostly Catalan menu. Nor should you be shocked by guacamole, an homage to the restaurant’s namesake, Pere Calders, who was exiled in Mexico. Superb for late night noshes based on good ingredients put together in a nonconformist style.
Bar Calders, where the Raval meets Poble Sec near the Sant Antoni market, Carrer Parlament, 25. Tel: (011-34) 329-93-49. They close early on Sundays, at 9pm.

El Filete Ruso is one Eduard loves for “their dedication to local food.” And yet, alongside innovative tapas, all starring superb, in-season ingredients, they serve a fabulous array of burgers. Yes. The thing is, their interpretation is totally “kilometro zero”–the beef comes from a biodynamic farm in the Catalan Pyrenees. The street this one’s on–a residential pedestrian way right in the heart of the Eixample–is worth a stroll.
El Filete Ruso, in the Eixample btw. Còrsega and Rosselló at Carrer Enric Granados, 95. Tel: (011-34) 93-217-13-10. Open daily, later on weekends.

Gut is good, says Eduard. It is another one that focuses on food that is simple, seasonal, and homemade. There are Catalan classics like pigs’ trotters with ceps (porcini) and grooviness like brown rice with shiitakes and artichoke chips. The words gluten-free even appear here and there on the menu. Maybe one of the best things about this place is that it encourages a walk up above the Diagonal and into Gràcia. Let a lunch here lead you farther into a neighborhood that’s not in your guide book but very worth strolling.
Gut, in Gràcia, Carrer Perill, 13. Tel: (011-34) 93-186-63-60. Closed Sunday evenings.

Can Recasens is in Poble Nou, another neighborhood that might not be in your guidebook, and definitely worth a stroll–it is transitioning, à la Brooklyn, though slower. The Rambla Poble Nou will take you right to the beach, just up a bit from the heart of the city. Recasens was a butcher shop established at the turn of the 20th century on the ground floor of a pretty modernist apartment building. It then became the neighborhood place for cured meats, cheeses, and wines. It still is, but also serves simple suppers that show off the ingredients they stock.
Restaurant Can Recasens, Rambla de Poble Nou, 102. Tel: (011-34) 93-308-81-23. Lunch Saturdays only. Two dinner seatings, 9pm and 11pm. Closed Sundays.

And that picture up there? It’s the Bar Velódromo. Eduard likes it because the building is amazing. Reviewers say it’s been “restored to its former glory.” But he also likes it for its traditional Catalan bistro food. The chef is Jordi Vilà, who earned his Michelin star at Alkimia, which makes it hard to imagine it’s all that traditional.
Bar Velódromo, in the Eixample, Carrer Muntaner, 213. Tel: (011-34) 93-430-60-22. Daily 6:00 a.m. to 2:00 a.m.