Collin, this thing about separating the inner bean from its tight-fitting skin before blanching... wow, que martirio, digo yo. You can read here about the txotx (the apple cider season in the Basque Country: http://spanishjourneys.com/oliveme/2009/01/14/txotx-breaking-out-the-bas...) and here about calçotadas (the spring onion season in Catalonia: http://spanishjourneys.com/oliveme/2010/03/13/making-do-calcots-in-new-y...), but there are hundreds of festivals celebrating local foods and food traditions -- practically every little community in Spain has its own food to celebrate. When I'm on my way to Catalonia, I have a look at Fires i Festes to see if there's something my friends have neglected to mention (http://www.firesifestes.com/). And for the Basque Country there are listings on the Basque tourist office's site (http://www.turismoa.euskadi.net/s11-15521/es/) If you're going to recreate these kinds of things in your restaurant, I think you have to go and experience them first in Spain... fall in love with a few... if your heart, your true appetite, is in the celebrations you choose to honor, everyone will feel that.

Trust me...as a professional, peeling fava beans is a major pain in the neck...and fingers! The way we do it is to peel the beans first, THEN blanch. It is significantly more work but the beans come turn out noticeably sweeter.
On a different note, I have been thinking about opening a restaurant based on the cuisines of the basque country, the pyreenes region, and south-western france. I have been to these areas a few times, and have fallen for the rustic and soulfull nature of their food and people. I was wondering if you had any information regarding any food festivals that are native to these regions, as I would like to celebrate them, as well as, help to educate my customers about these important food cultures. I appreciate any advice you can supply. Keep up the great Blog! Collin Donnelly

I have just harvested my first crop of fava, many thnaks for the timely recipe- and the directions on what to do with them afterward. I loved growing them but had no idea how to peel and cook them!
Lucky for us on Cape Cod this has been a banner spring and summer for the garden. The second crop of favas has been planted - we'll see if there's a fall harvest. In the meantime, all the best my friend.

Sorry my dear this is just toooooo much for me! However, since you are professional , I'm sure you could make short work of the whole thing, though it sounds like it would take me hours. 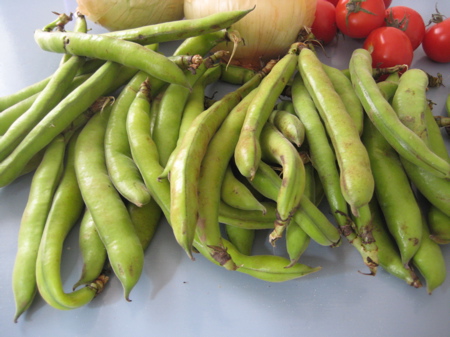 Fava beans are a bother. But they make such a grand appearance in spring, you really can't help wanting to give them a chance. They're big and fat and fleshy and green when not much else is. In Barcelona, they start showing up in markets in February or March and disappear again by mid-June. I'm still seeing them in New York and New England (where people call them "broad beans"), so depending on where you are, it's not too late to bring a pile of them home and make this salad.

It combines the beans with fresh mint and tarragon and a major motivator for reluctant shellers: a good handful of chewy salty hammy bits. I'm not exaggerating about the mountain of beans you'll want to start with. That picture up top shows the two pounds I bought the other day. Shelled, they weighed in at 3/4 pound: 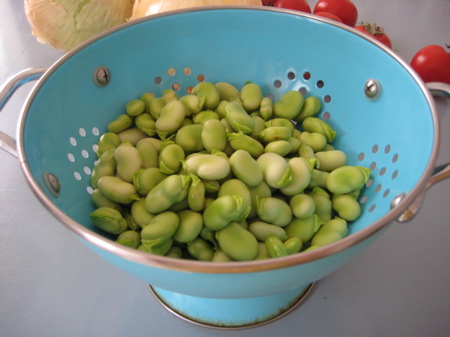 And I still hadn't reached paydirt. You've got to blanche the beans, then pinch a little hole in the tough skin of each one and gently squeeze out the brighter green, perfectly tender inner bean. Anthony Hopkins fights the tedium by pouring himself a nice glass of Chianti at this stage. 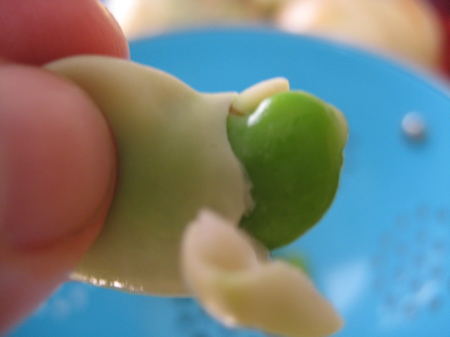 My two pound pile of favas in the shell yielded just six ounces of salad-ready beans -- not quite enough, really, for the first course salad for four that I had in mind, though we made do just fine. The flavors that come together in this salad are a springtime echo of those found in faves ofegades, one of Catalonia's old-fashioned simmered winter bean dishes. Whereas dried beans might get a little ham bone to enrich their broth, and chunks of sausage too, these fresh ones get tossed with neat cubes of cured ham or bacon. The shot of anís that adds complexity to winter beans is replaced by fresh mint and tarragon here.

This kind of seasonal revision now seems easy, but when we made this salad in cooking school 20 years ago it was the kind of thing people got excited about. It was lighter, prettier, and greener than traditional faves, but were still somehow true to the original. It is still a salad to get excited about:

Shell the favas, then blanch them in boiling salted water for one minute. Drain and cool the beans under running water.

Once you can handle them, peel the tough skin off each bean: pinch a little hole in the edge of the skin and squeeze gently––the tender inner bean will pop out. Set the tender favas aside in a small bowl.

Place the minced shallot in a small measuring pitcher or bowl, then add the salt, sugar, and vinegar. Whisk in the oil and correct the salt.

Wash and prep the frisée, tearing bite sized pieces into a large bowl. Mince the herbs and toss them into the greens, saving out a couple of tablespoons of each for the garnish.

Lightly dress the frisée and herbs––you won't use all the vinaigrette––then correct the salt and plate it.

Dress the favas, drop them onto the greens, then distribute the ham or pancetta. Garnish each salad with good pinch of the remaining mint and tarragon.