I talked to the mayor's office in Forallac and learned that at the end of the Carbonera, the charcoal is stored at the farmhouse property where the event is staged. Over the course of the year, it gets used by the community-- whenever the little towns that make up Forallac or a village cultural group has an outdoor event, this is their trove for collective cookouts. And by the way, charcoal made this way is truly awesome, it makes a hot, long and clean burning fire.

Hey, cool story! Love the photo of the man on the red stool. What do they do with all that charcoal?

Thanks for the information. I just have to say that the film "El Territori al plat" is a co-production by Videoplay Serveis and Vinagreta. Salvador Garcia was the presenter of the projection in la the magic place of la Carbonera. I hope that you enjoy the trailer and you want to see the whole documentary. Thanks a lot!

Beautiful story! There used to be charcoal burners in every woodland glade here in the Garfagnana (Italy), but the only remnant left is a mock-up along a historical walk at the village of Colognora, where there's a chestnut museum and annual festival. This gives me an idea for a new festival... 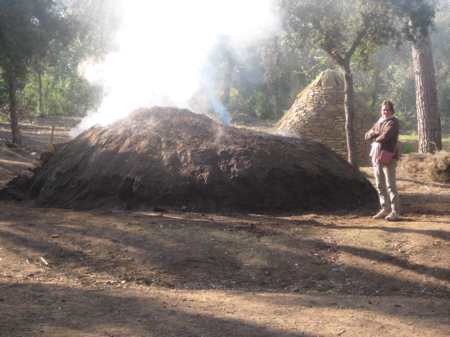 A sign on the road connecting La Bisbal to Palafrugell, hardworking inland towns near Catalonia's Costa Brava, points the way to the celebration. My friend Assumpta and I showed up mid-morning last Thursday during a lull in the action that allowed Sr. Plà to tell us about what appeared to be a woolly mammoth, alive and snoring steamily at his feet—the centerpiece of La Carbonera.{C} {C} 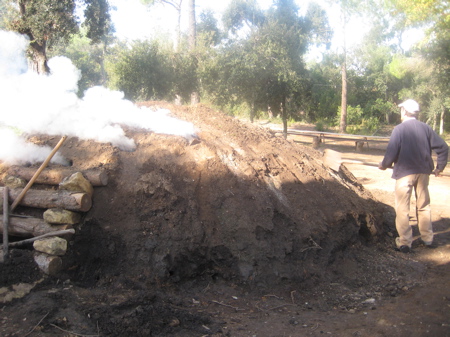 The beast turned out to be an artfully controlled fire: 10,000 kilos of oak burning at somewhere between 800 and 900 degrees Celsius (that's about 1500 degrees Fahrenheit) under a dark brown mound of dirt. Sr. Plà kept one eye on the mound as he talked to us, patting it now and then and pointing out places where a nimble colleague ought to bring on a shovel of dirt and tamp things down a bit.

For all that fuel, the pile generated surprisingly little smoke, which Sr. Plà explained is what you want with this oxygen-deprived burning process. He told us he was on the lookout for "clean" smoke, which indicates things are progressing well and the wood converting to charcoal as it should. "Too much air and all this would go up in flames," he said, "and that would be a disaster." "Listen," he said, sklonking two black logs together. The sound was hollow and glassy. "This is from last year's Carbonera. You can hear that this is good charcoal. It doesn't weigh a thing, but it will burn perfectly." If all goes well, he said, every thousand kilos of wood will yield about 170 kilos of charcoal. 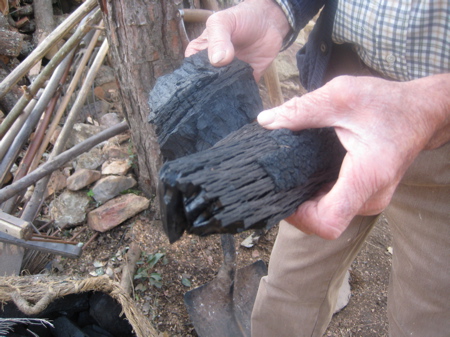 Plà learned the art of charcoal-making as a young man, when every community had a carbonero who knew how to turn aged cork oaks uprooted to make room for crops into cooking fuel. "This is what I did up until 1950 or so, but then they came along with gas."

"Nowadays," he said with a shrug, "we do it to entertain ourselves." And so they do: hundreds of people from towns up and down the coast find their way down a winding dirt road to a clearing in the oak woods around the old Mas Frigola farm in the village of Sant Climent de Peralta. Sawhorses and plywood are strung together into long communal tables and festival lights dangle overhead.

Since the Carbonera has to be tended from the time the fire is lit on October 12th until the time the finished charcoal is stacked on the 30th, visitors are welcome to stop in any time, 24 hours a day. A dozen barbecue grills dot the clearing and everyone is expected to bring along plenty of sausages, bread, and wine, at the least.

The Carbonera is about tradition-keeping, too. "Want to see our barraca?" asked Sr. Plà. We stepped in through an opening on the side of a long oval hut faced with stone. The Homes del Foc (Men of Fire), including the mayor of Forallac, Josep Sala, sleep here, right next to the pile.

The mayor wasn't around last Thursday—perhaps he was napping back at Town Hall. But we did meet one intrepid young Dona, Cristina Colom, who has joined the crew. Her father, Lluís Colom, knows the ropes well. "I'm still learning," she said with a modest but confident smile.{C} 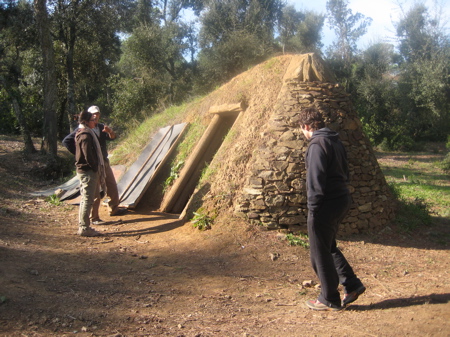 "Yeah," said Sr. Plà, with a glance at the sleeping bags lined up on the tamped earth floor of the barraca, "I'm here every day, but my days of sleeping on the ground are over." {C}

XVIII Edició of La Carbonera de Forallac, 2010, began on October 2 (when the carboneros built the wood pile); the earth layer was added on October 9. Things really got under way October 12, when the ull or "eye" of the fire was lit (a local archaeologist is responsible for rubbing a couple of stones together to supply the spark). Special events so far have included music, children's activities, and a screening of "El territori al plat"—a documentary about the relationship between our landscape and what we eat) by the journalist and gastronome Salvador Garcia. Click here to see the trailer on Facebook.