I had this at a wedding in Spain and I loved it! I'm so glad you posted this recipe...I will certainly try it! 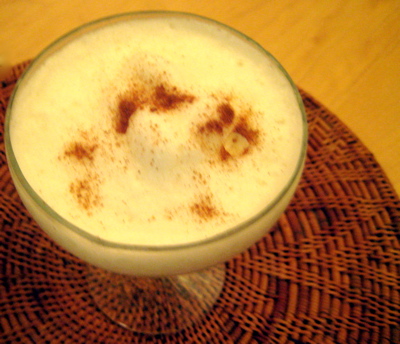 Walking down Carrer Parlament in Barcelona’s Raval one day in June, I came across a place that brought back sweet memories of summers in that city. The neighborhood has become trendy, but Horchatería Sirvent is still there, righteously unhip. Sirvent is an old school place that holds firm to the Spanish belief that icy sweets are strictly warm weather treats. In high summer, the shop expands its hours, and crowds fill the neighborhood sidewalks, sipping peacefully until the store closes at 1:30 a.m.

One of the specialties at Sirvent is horchata de chufa, a nutty-milky drink made from ground tiger nuts. But my favorite is helado de leche merengada—literally “meringued milk." This dessert is part granita, flavored with a light zest of lemon rind and a warm dash of cinnamon, and part milk shake, made frothy with a quick meringue. The traditional version is served in a tall narrow glass with a dash of cinnamon on top, a spoon, and a straw. There’s also a fabulous ice cream version on a cone.

Neither leche merengada nor horchata are purely Catalan treats—they’re Valencian, from a little further down the Mediterranean coast. But Sirvent’s recipes have been Barcelona favorites for more than 80 years. Tomás Sirvent Planelles first opened his horchatería in the Barri Gótic in 1920. His son Tomás Sirvent Plá moved the operation to its current location in 1943, and now his sons Marc and Tomás Sirvent Juncos, grandsons of the founder, are learning the business, with plans to continue the family tradition.

In the winter, the Sirvents close up shop and head to Valencia to tend to a related business: making turrons, Spain’s almond nougat candy. The Sirvent reputation rides on their dedication to excellent ingredients; they are picky about the tiger nuts, marcona almonds, and rosemary honey that go into their artisanal versions of the traditional winter sweet. Most everything they use comes from Xixona, their hometown and Spain’s turron capital.

The shop displays a sign warning that, though there may be imitators, “this store has no other branch.” The sign stayed in place even after the Sirvents opened a second shop on Carrer Balmes a few years ago. Confusingly, the store on Balmes is called “Parlament, 56.” “We didn’t want to be mistaken for the other Sirvents,” says Marc, revealing the family’s thinking on what New Yorkers will recognize as the “Ray’s Pizza” problem. “There are so many Sirvents that, instead of naming our second store after ourselves, we named it after our other store’s address, which everybody knows is ours.”

What the fresh flavors here confirm is that this is no chain operation. Sirvent is a worthy destination on a walk into a less tourist-clogged corner of downtown Barcelona. It is at the edge of the Raval, the neighborhood to the right of the Ramblas as you face the sea, in what was always a working class district, dotted with some medieval treasures and worried by a few rough spots. Lately it’s been discovered by the arty—the Museu d’Art Contemporani de Barcelona (MACBA) is here. Fashionable shops and the halal markets of North African immigrants are interspersed with vestiges of the old neighborhood. The location also borders Poble Sec, where a walk seaward along the Ronda Sant Pau and on down the Paral-lel takes you to the Drassanes Reials, the medieval shipyards, and a remarkable intact section of the city’s 14th century walls.

“Our neighborhood? Sant Antoni, of course,” says Marc, reminding me that since the store sits just outside the old city walls it is officially part of the Eixample. While tourists flock to Gaudí’s houses in the swanky middle of the district, this left-hand side is defined by another moderniste delight, perhaps equally interesting to food lovers: the Mercat de Sant Antoni. Designed by Rovira y Trias and finished in 1882, this beautiful ironwork market is actually bigger than the famous Boquería—and, with nary a tourist roaming the stalls, maybe better.

The Sirvents become tight-lipped if you press them to reveal what makes their leche merengada so good. As I review the recipe I’ve worked out at home for the ice cream version, Marc’s brother-in-law José Antonio says, “The flavors are simple—milk, lemon peel, cinnamon. The secret is in the proportions,” which, he quickly adds, “we are not going to tell you.” What makes this dessert such a hit is that it is ethereal on every dimension. The milk makes it crystallize into a less shardy texture than a granita, but leche merengada is still much less rich than ice cream. Whipped egg whites make it light as air. The lemon and cinnamon are refreshing but so subtle you’re not sure they’re there. “You want it to be just scented with lemon, but you don’t actually want it to taste lemony,” says Jose Antonio. “That’s it. Now I really can’t tell you anything more.”

Helado de Leche Merengada
This is the easiest of frozen desserts imaginable: it has few ingredients and does not call for an ice-cream freezer. But it does require a little attention to timing. The milk base must be heated and then chilled, so it’s best made the night before you plan to serve the dessert; then you’ll check and stir the mixture a few times over the course of an hour, as it freezes. (If you have an ice-cream freezer, you can use it—mine worked great when I didn’t get the base ice-cold enough ahead of time for the granita method to freeze it in time for dessert.)

1 quart whole or 2% milk
1 cup sugar, plus 2 Tbsp. more for the meringue
1 cinnamon stick
1/2 vanilla bean, optional, or 1/2 tsp. vanilla extract
Rind of one lemon, the yellow skin pared off in strips
4 egg whites
Sprinkling of ground cinnamon as a garnish

For the milk base: Pour the milk into a saucepan and add one cup of sugar, the cinnamon stick, vanilla bean, and lemon rind. Bring the mixture to a boil, stirring occasionally, and then lower the heat to simmer for three minutes.

Remove from heat to cool, and pour the milk through a fine strainer into a wide, shallow metal bowl or baking dish (you want the base to be only about one inch deep so it will freeze easily). Discard the rind and cinnamon stick and scrape the soft inner flesh of the vanilla bean into the milk before discarding the pod. Refrigerate overnight or all day until well chilled.

Freeze, fluff, and finish: About an hour before you plan to serve it, place the milk mixture in the freezer. After about a half hour it should begin to set up. Stir it well with a fork and put it back in the freezer for another 15 minutes.

Meanwhile, beat the egg whites with the remaining 2 Tbsp. of sugar until the meringue holds shiny firm peaks. By now the milk mixture will be further frozen. Stir it well with a fork again, fold in the meringue, and put it back in the freezer for another 15 minutes. (Alternatively, pour the base into your ice-cream freezer and churn for about a half hour or until it sets up like a sorbet, then fold in the meringue.)

Serve in a tall slim glass with a straw and a spoon and dust the top with a pinch of ground cinnamon. (A squat glass and spoon will do, too.)