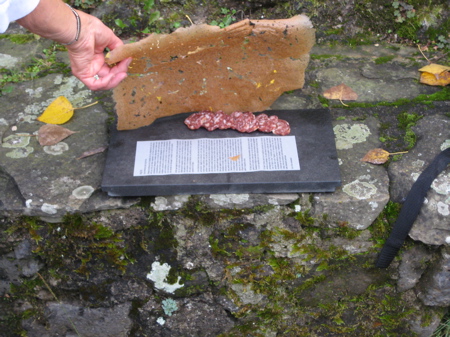 Fina Puigdevall is probably the most committed locavore among her fellow Michelin star-winning Catalan chefs. Her restaurant, Les Cols ("the cabbages"), occupies a family masía (Catalan country house) in Olot that dates back to the 15th century, though she hasn't shied away from a few modern improvements--like the dramatic glass wall separating one of the dining rooms from the chicken yard. {C} 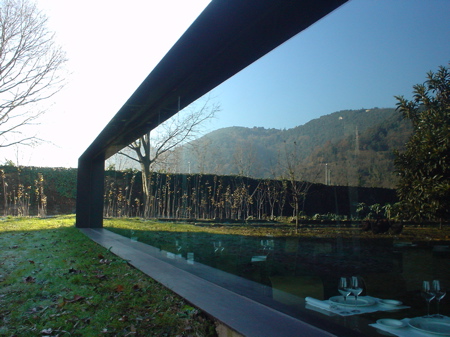 The design is radical, the chef says, "but the most radical thing I'm doing right now is this: I'm not serving fish anymore, even though we can get fresh fish from the coast of our own province. It's only an hour away, you know. But we’re gradually retiring it from the menu because it’s not part of our local cuisine, our landscape."{C}

We rolled into Les Cols this fall, a group of food-loving American travelers who had just spent a couple of days at another masía, Mas Garganta, the farmhouse inn run by Fina's sister Inés. (I've mentioned it here.) The contrast between the two places—the inn humble, comfortably showing its age; the restaurant extravagantly embellished in cutting-edge design—is weird. But gradually the similarities in these two sisters' ways become clear. Together they reveal a contradictory but defining Catalan sensibility that reveres everything traditional and close to home and at the same time embraces innovation and craves worldly adventure.

Both women are deeply in love with the Garrotxa, the Pyrenees foothills west of Girona, where they were born. Inés has replanted the old kitchen garden, trying to recover the self-sufficiency of the farmhouse as it might have been when her grandfather lived there. And even though Fina has made more radical amendments to her masía, she says, "There’s no place I’d rather be than this. There’s no landscape I long for more than the Garrotxa. Don’t get me wrong, I do go away sometimes, and I think it’s important to have the chance to miss this place. But I think we are in a world in which people move around way too much. What I am trying to do is somehow transmit this whole place to people."

Both sisters have an artful eye for spaces. The table in Inés's pantry is a tableau for silent still lifes that she quietly arranges every day—pumpkins and squashes, a bunch of celery in a bucket, a braid of tomatoes. A hedge of red roses stands at cooks' eye view outside a long window in Fina's kitchen. {C} 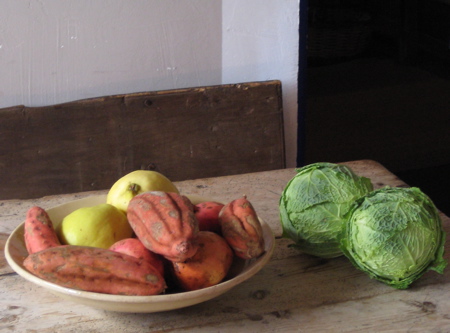 But Inés flees when I pick up my camera. And Fina won't visit our table until we insist. "I don’t want the restaurant to be about me," she says, "I want it to be about the place. When we're all here in the kitchen, I like to imagine I can go unnoticed." "What our two places have in common," Fina says, "is that they are both very real. We both believe there is an important feeling that comes through when a place is real and in that sense we are doing exactly the same thing." Well, not exactly. If you've eaten on Inés's terrace, you've shared a stretch of mismatched wooden tables with other travelers; Fina's shared table is a single sleek curve of gold-colored steel.

At Inés's, you slice your own local sausage with crusty bread and humble jug wine; at Fina's the sausage is served on a platter alongside a poem and a cold glass of reserve Cava. If you've had one of Inés's hearthside suppers, you know the white beans from Santa Pau that are the pride of the region; at Fina's, they are rendered as "caviar" in delicate spheres atop a tiny "blini" made from local buckwheat—a traditional crop in these parts that is undergoing a quiet renaissance here. The stew of chicken, pork, and wild mushrooms we had at Inés's was real. Our 14-course tasting menu at Les Cols might be described more properly as surreal—in the best sense of the word.

Here's the menu from our feast at Les Cols. I've added the wines we drank in italics and a few explanatory notes in parentheses:

The land, the water, the cereal, the essentiality of primary food: Homemade sausage from Olot with buckwheat crust (the “crust” was a big paper-thin crisp we broke in pieces to eat with the sausage and Cava)

With the texture and scent of this mushroom: Mushroom salad, pine nuts, beet leaves, tortell d’Olot (tortell is a traditional pastry; this was a slim biscotto-like serving)

To eat with fingers: Cornbread sandwich, cereals bread from Els Hostalets d’en Bas, crumbs, olives (baked in a nearby town famous for its wood oven and made into a little sandwich)

A vegetable of the season: Pumpkin, eucalyptus oil, garlic flower (a soup)

A hostel dish: Rice with squids, sausage, peppers, citrus fruits in batter (traditional “black” rice, served to travelers who lodged in the hostels on their way to market, garnished with thin slices of lemon and orange in tempura)

With a traditional preservation process: Pickled pork ribs, banana, honey, coffee (a sweet and earthy version of excabetx, the Catalan pickling technique; the new world additions gave this a lot in common with a Southern barbecued spare rib)

To share: Chocolate bar, an evocation to the restaurant space (a riff on the traditional children’s after-school treat—waiters carved off dark chocolate bars and slices of coca, a sweet, simple Catalan pastry)

With the typical liquor from la Garrotxa: Ratafia ice lolly (this liqueur is like nocino, made from green walnuts and 40 herbs)