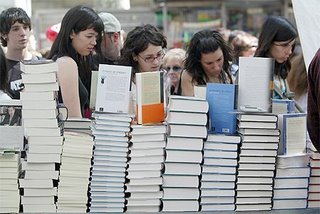 If Valentine’s Day has caught you by surprise, just say you’re holding off until La Diada de Sant Jordi, April 23 – that’s the day love is celebrated in Catalonia. There’s no pressure to buy uncomfortable undergarments for the occasion either because to prove their love, the Catalans give one another books.

Lady-loves also receive roses on this day. There’s an ancient tale of chivalry here. In it, George appears as a handsome caballero and slays a dragon who was holed up in Montsant demanding the sacrifice of a princess.

In courtly love parlance, the rose represents the dragon’s blood and ordinary guys get to be dragonslayers for a day. The books are a 20th century tradition that began with a commemoration of Cervantes and Shakespeare’s deaths – both supposedly April 23, 1616 – and has evolved into a fantastic city-wide book fair, with stalls lining the Ramblas and squares, marathon Don Quixote readings, and poetry slams. 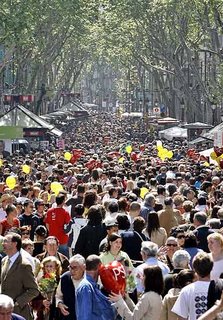 Strangely, I haven’t found a particular food revered on this day, though I hear there's a movement afoot to give an anís-flavored bunyol (basically a doughnut hole) the honor. But still, Sant Jordi is Barcelona’s best spring fever fest, the day everyone cuts out of work to stroll and browse and smooch. There are sardanas at Plaça Sant Jaume in the evening, and the Palau de la Generalitat is open to the public all day.