I'm a big fan of making cold process soap and castile soap=) Everyone knows Spain makes the best olive oil and that the only source I use for my castile soap! I never thought about recycling oil that I had cooked with though. Great tip.

Thanks froma fellow soap maker! I am going to Spain next month, can hardly wait to check out the soap scene!

Looks amazing! I'm just waiting on my lye to arrive so I can try it (with gloves and goggles). Thanks for sharing!

So the oil is not heated in this method? If so, I can't wait to try it. So much simpler than all the heating proccesses I've researched online. I can't wait to hear the answer!

I tried this recipe yesterday - now just waiting for the soap to cure so that we can use it! thanks for sharing.

I have lived in Andalucia for many years and many make soap from the left over olive oil used for frying. Mostly fish and meat have been fried in this oil and the resulting soap is not so good. The Andalucians use it for washing clothes and hands but never on the body or face. Once olive oil has been used for frying it loses its "good qualities" for use on the skin.
I buy my soap from a company near Sevilla who make wonderful soap with fresh extra virgin oil. It is the mildest i have ever used and it is excellent for dry skin and problems such as exzema and psoriasis. If you are visiting Spain then check them out.
www.andalucia-naturalsoap.com
Ps. you can also order online from them.

Is this six ounces of lye by weight or volume? 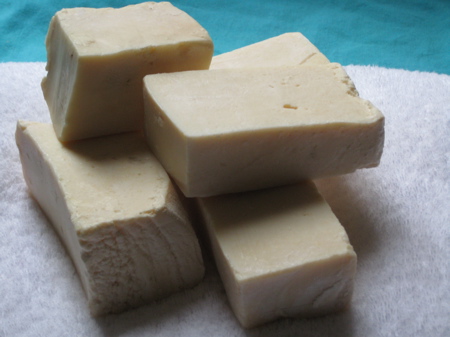 As I pulled these creamy blocks out of my suitcase after my last trip to Spain, Ed was standing by as usual, salivating, and asking about how I had eluded the food-haters at U.S. Customs this time. Then I broke it to him: "It's not cheese, it's soap." The stuff is so pure you could almost eat it. It's made out of nothing but olive oil, water, and lye. So even though Ed is not much interested in things you can only almost eat, I think the recipe is worth sharing. 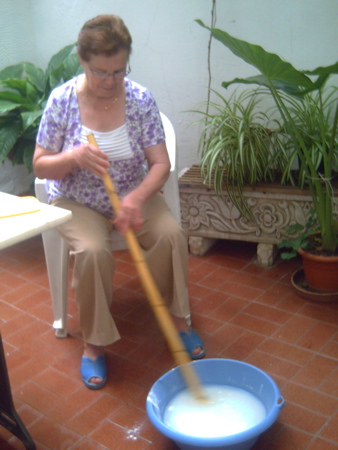 My soap coach on this trip was the fabulous Paquita Funes, andaluza and mother of Señorita Bragas Limpias, a friend who earned that nickname on her last trip to the U.S. for the meticulous care she lavished on her deluxe dainties. Little Miss Clean Underthings never leaves home without a bar of her mom's homemade soap.

Paquita recycles her family's olive oil into amazingly soothing slabs six liters at a time. "I like to make the soap out of the oil I've used for frying roscos," she said, referring to her plain little doughnuts -- they leave the oil nice and sweet and clean. She filters her olive oil by pouring it through a cheesecloth-lined sieve, and because she fries the roscos gently, she re-uses it a couple of times before turning it into soap.

Andalusians are shameless consumers of olive oil. And why not? They produce more of it than anyone else in the world. My former mother-in-law swore the secret to my ex's fabulous skin was that his first bath involved no water whatsoever: "It's much better to massage newborns in olive oil," she always said.

For those of us who don't generally have six liters of oil in circulation, I've reduced Paquita's recipe to proportions based on one liter of olive oil and converted it into U.S. measurements.*

Place the olive oil and the quart of water in a large nonreactive bowl (ceramic, glass, or plastic).

In a separate nonreactive bowl, carefully add the lye to the additional 3/4 C cold water -- it will bubble and steam, and the lye can burn, so do this carefully***.

Then add the lye solution to the olive oil and water base, stirring in a bit at a time, and again using great care.

Stir the mixture with a long wooden spoon, mixing always in the same direction, until it thickens to the consistency of a thick bechamel -- this can take some time.

Pour into glass, silicon, or metal loaf pans (or an official soap mold) and leave to set for at least 24 hours. Turn out the soap, slice it into bars, and wrap in parchment paper to cure for another two weeks before using.

*Paquita's recipe uses the simplest cold process method. And by the way, this soap is technically "pure Castile," sometimes called "pure Marseilles," in that it uses 100% olive oil. Check out Walton Feed Company's soapmaking pages for loads of details on the soapmaking process, including charts for double checking your measurements, which are especially important if you want to mess with this recipe by, say, swapping out 20% coconut oil for harder bars or tarting them up with oatmeal or essential oils.

**Good pure lye for soapmaking is not to be found over the counter in the U.S. Various soapmaking sites I’ve browsed recommend Camden-Grey, an online supplier of lye, essential oils, and other supplies for soapmakers.

***I recommend suiting up in goggles and gloves and otherwise doing this project the personal-injury-lawsuit-conscious American way.