I look forward to trying this, Teresa. Reading back through your blog a little at a time and enjoying it so much! 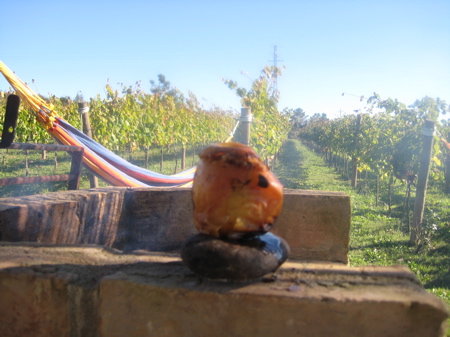 It has always seemed to me that cooking over a wood fire requires a certain restlessness. Cookouts with my Catalan friend Jaume prove this is true even on Mediterranean shores. The mood around his fire might be mellowed by fall sunshine and hits of wine from a porrón, but still, there are mushrooms to move from one side of the grill to the other, arguments to be fanned regarding the best way to grill a coca (pizza's Catalan cousin), and embers to be jabbed.

That's why it struck me as a little odd that Assumpta, who was, after all, in charge of dessert at this particular October cookout, was making herself so comfortable. "I'm doing pomes a la pedra," she said from her hammock: apples on a rock.

And there they were, teed up at the front edge of the fire: four flat rocks, each with an apple on top. At home, she had sliced off the top of each apple, pared out cores and seeds, and filled their centers with chopped toasted walnuts and honey. The tops went back on, leaving the apples looking whole again, with only a fine line around their tops giving away the fact that they'd had some work done.

"I make these at home, too," said Assumpta, "on cool fall nights when we have a fire." She keeps a few flat rocks on the hearth just for this purpose. She puts an apple on each rock and sets them next to the fire to slow roast through dinnertime and on into the evening. She has perfected a technique for turning the apples: "I nudge the rocks around with my toe every so often while we're sitting around the fire."

Dessert is ready when the apples begin to blister and their sugary juices bubble out onto the rocks. They're not bad oven-roasted in an ordinary baking dish. If you add a few drops of good Spanish brandy to the filling, and eat them next to a warm wood stove, they might even taste a little like the smoky ones from Assumpta's hearth.

I like a smallish apple for this dessert, unless you're sharing. Honeycrisps, which are descended from Macouns and goldens turn a very pretty pink color when roasted.

For each apple:
1 tablespoon toasted walnuts, chopped (or one prune, chopped, or a combination)
a pinch of cinnamon
2 teaspoons good brandy
2 teaspoons honey a pat of butter (about one teaspoon)

Preheat the oven to 350 degrees. Pour a tiny bit of water, a scant 1/4 inch, in the bottom of your roasting pan (apple cider or orange juice work nicely if you happen to have those).

Cut off the top 1/2 inch of each apple, on the stem end, and reserve the tops. Carefully cut out the stem, seeds, and cores, but don't go all the way through to the bottom of the apple––the apple to will hold its filling and juices better that way.

Set the apples, cored end up, in the roasting pan. Stuff them with the chopped nuts and/or prunes.

Add a pinch of cinnamon to each. Spoon in the brandy and honey. Poke in the pat of butter. Place the top of each apple back in its place, covering the filling.

Roast for about 45 minutes, or until the apples are tender. Spoon any pan juices over the apples before serving them.