I am facinated by the variety of fish stews so favoured in Catalan areas.

In Menorca,, with its Catalan origins, lobster stew is famous amongst visitors.

It is believed that Fornells is the only place to really experience caldereta de llagosta, the renowned spiny lobster stew.

Its origins appear to be similar as it was the fishermen making full use of the lobsters they could not sell.

Caldereta de Llagosta is apparently so good that King Juan Carlos sails from his holiday palace in Mallorca just to eat lobster stew in Fornells.

hi teresea - can't wait to make this for a dinner party again. so sorry none of us media types thought to photograph the process, especailly the spectacular flambe, the finished dish, and the table! really one of the best dinners ever!!!
cheers,
deborah

yumm! I really enjoy reading your recipes, I feel like I'm in the kitchen with you again :) Man it's been way too long huh? xo Jen

Wow. I read with rapt attention. And this from a woman who was introduced to the wonder of a dutch oven from the Blogger herself. Now, could I and my dutch over really master this masterpiece? I'm willing to try but why not come for dinner and coax me along?

It is the best recipe writing I've ever read! Adventure cooking! Bravo! 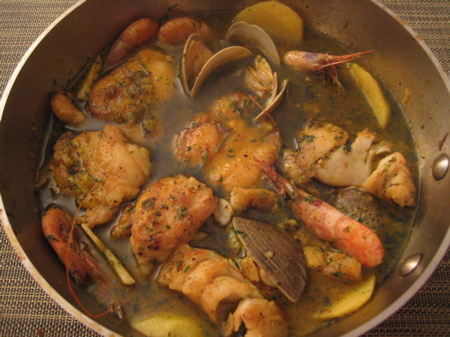 Suquet, everyone will tell you, is Catalonia's bouillabaisse––a thrifty fishermen's stew made from the less promising creatures amid the day's catch. Next thing you know, they're serving you a rich bowlful of the stuff, scented with brandy and saffron and topped up with luxury goods like langoustines. Who wouldn't put it past those Catalan fishermen to take a little extra time at sea to flambé their lunches?

My sea captain friend Joan Santolaria says suquet has always been a gussied up restaurant thing. "Now ranxo, that's the real deal, pure and simple," Joan says, handing me hours of evidence to prove his point, fresh from the audio archives of the University of Girona's Documare Centre for the study of the region's seafaring history. I'm now working my way through the first-person stories of a whole generation of fishermen-elders who've been recounting their lives for Converses de Taverna, the Center's fireside chat oral history project.

So far, their subjects are two: storms and lunch. Lunch is, or was, anyway, ranxo. Quick, simple, and perfect for summertime. But right now the slush is speaking. "Flambé something," it says. Plus, at least on my American coast, those sweet little Maine shrimp are in season.

So, suquet. It will take you an hour or so of tending, but it will give you back an evening of lusciousness. Saving a drop of the brandy for later is a proven way to melt any remaining ice off your heart.

Start with the picada, the flavor and texture hit you'll blend up (or, grind in a mortar and pestle) for finishing the soup:

1. Heat a dutch oven or soup pot and drop in the saffron, letting it toast lightly for just a minute, then remove it to a blender (a food processor also works, and, of course, so does a mortar and pestle, especially if you have a grandma on hand, willing to patiently pound your picada mixture).

2. Heat the half cup of olive oil in the same pot and gently fry the garlic slices in it. When they're golden (but not brown), remove them to a small bowl and set them aside.

Keep the oil from getting smoking hot as you continue frying: first tumble the almonds for a minute or two to lightly roast them; drop the fried almonds into the blender with the saffron.

Fry the handful of parsley into the oil––make sure it is really dry before you drop it in or it will crackle and pop and throw hot oil all over the place. Toss the parsley until it is a shade darker and remove it to the blender. Fry the bread slices until they're golden brown on both sides and add them to the blender too.

Turn the heat off while you whirl the picada. You want it chopped into a fine, crumbly condiment, not a paste. Set the picada aside––you'll use it to finish the stew. Now to the stew:

3. Cut each of the fish fillets into 4 equal portions, salt and pepper them generously, and dredge them lightly in flour. Fire up the garlicky oil again, and fry the fillets about 4-5 minutes, until they're deep golden on just one side. Remove the fish to a plate, turning the pieces as you go so that they rest browned side up. Set the fish aside.

4. You need only a few tablespoons of olive oil at this point, so pour off the excess into the bowl with the browned garlic slices. You will dip into this when you garnish the stew. Wipe the edges of the pan: you're about start a little fire, so you want to be tidy with your oil.

5. Salt and pepper the shrimp and sauté it in the soup pot for just a minute or two, until it takes on a little color. Put the fish pieces back in the pan with the shrimp and pour on the brandy. Give the pan a shake to distribute the sauce––you don't want to bust up the delicate fillets by stirring. Build layers of flavor:

6. Flambé the fish,* then after the flames have died out, gently pour fish, sauce and all, into a deep plate or shallow bowl. Set it aside and keep it warm.

7. Add a couple of tablespoons of clean olive oil to the pan and sauté the minced garlic, onion, and sweet red pepper along with the pinch of red pepper flakes, the bay leaves, and the star anise. Give the sofregit (that's what the Catalan call this caramelized aromatic base for sauces) a good ten minutes: it wants some attention and stirring so it takes on color but doesn't burn. Add the tomatoes and give the sofregit another ten minutes: you want the sofregit to be very soft and a little caramelized.

8. Add the fumet to the pan with the sofregit and simmer it all for 10 minutes. Pour the mixture through a strainer, collecting the broth into a bowl. Mash your spoon against the vegetables to squeeze out more flavor before you pour the broth back into pan. Discard the solids.

9. Add the potato slices to the soup and bring it to a low boil. Simmer the potatoes for about five minutes, until they just begin to get tender. Slip in the clams and continue simmering until they begin to open. Gently pour the fish, shrimp, and their brandy-rich juices back into the pot and give the stew a gentle shake and simmer, just to combine the flavors well. 10. Sprinkle the picada into the stew, incorporating it with a shake of the pot. You'll notice how it enriches and thickens the stew just a little. Taste the stew and correct the salt––it may not need any, usually the clams release just enough.

10. Divvy up the fish, shellfish and potatoes into big shallow soup bowls, add the saucy soup, and finish each bowl with a drizzle of the reserved olive oil and scattering of the slices of golden garlic you set aside early on.

* More about the flambéing: If you're using a wooden spoon and a gas stove dip your spoon into the sauce, then dip the spoon into the flame; it will become a little torch. Then just touch it to the stew and you'll have a little blue fire in your pot. Shake the pan gently to stir until the flames die out––the thrills go on for about 30 seconds. If you're cooking on an electric stove, you can light the surface of the stew with a match.