Let the txotx season begin! Today is the day they tap the '08 harvest kupelas in the Basque Country. Astigarraga, just outside Donostia, is, of course, the place to be. {C}

More specifically, the place to be is probably Sidrería Petritegi. That's where, this year, after the Mayoral speechifying whereupon the virtues of the most prodigious (10 Million kilo) and most aromatic apple harvest in 30 years will be extolled, and after the apple tree planting (if you want the bounty, give back to the land) is done, at 1:45pm, the txotx season officially opens with a shout of "Gure Sagardo Berria ." That's so many daunting Basque words for: we're talkin' cider here, folks, the hard stuff, come and get it -- fresh and fruity and flowing from kegs all over town.{C} {C}

The shouter this year is a local pelota hero, Aimar Olaizola. Over the 16 year history of this cider fest, the job has been pretty much equally shared among men performing the most honorable Basque Country deeds: pelota champions, footballers, cyclists, and chefs (there's been one woman, the soprano Ainoa Arteta). 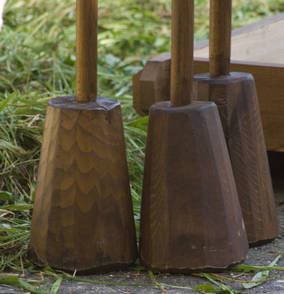 Yes, they're manly men up there in the Basque Country. And they've come up with yet another ritual after my own heart. After today's festivities, the Sagardoetxea—cider museum—is launching a season of "Kirikoketa" workshops, so that you too can learn to make the onomatopoeic sound of the mashers hitting the fruit (Jan-March, free to all who visit the museum). And of course there will also be, "Probaketas"—that's tastings to those of you who still haven't picked up Euskara (Jan-March, local ciderhouse tour and new cider tasting, 10E).