As I scrolled down the page a yearning to travel and experience the amazing places and foods on your blog hit hard and then there was the cheese. Thank you, Vincent 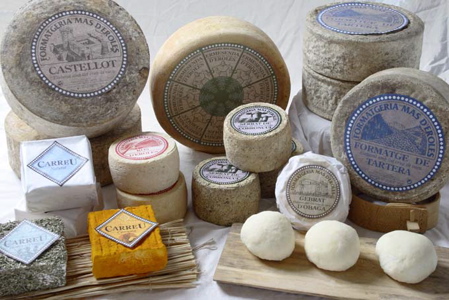 They have lulled you into believing, perhaps, that jamón Ibérico de bellota is the only smuggle-worthy delicacy produced in Spain.

Well, I've got news for you: the farmers of this peninsula's northern provinces are over there in their little mountain villages quietly making more and more fabulous cheeses. A few can be found at serious cheese counters in the U.S. (Artisanal, for instance in New York City offers great Idiazabal, a lightly smoky raw sheeps' milk cheese from the Basque country). More can be tasted in top Catalan restaurants, where the cheese course is undergoing a revival and chefs and sommeliers are taking up affinage (don't let the cheese cart roll past you at Les Cols in Olot; the one at Mas Pau in Avinyonet de Puigventós is prize-winning).

But if you're at all serious about getting a nose-full of the good stuff, the Fira de Formatges Artesans del Pirineu is the place to be. The festival brings some 40 producers who present over 100 cheeses from across the Pyrenees—Catalonia, the Basque Country, Navarra, Aragon, France—to the mountain town of La Seu d'Urgell during its Sant Ermengol celebration (always the next-to-last weekend in October, this year October 18-19th, next year October 17-18th, 2009).

One of Catalonia's most accomplished advocates of real food, Pep Palau, and his "Oenogastronomic Productions" outfit has turned the festival into a class act that excites ambitious cheese producers and eaters, with prizes in various categories, workshops, and a grand guided tasting. (Here is their report on this year's goings on and winners.)

When I met with him before this year's fest, Pep said that one cheese to watch would be Serrat Gros, an extraordinary aged raw goats' milk cheese produced in the Alt Urgell. He was right: this one took a first prize. The cheesemaker in this case is Eulàlia Torras, an adventuresome, well, goatherd who has just written a book about recovering this traditional product of the Pyrennees (Serrat Gros: Ed. Garsineu, Tremp).

She uses only milk from her own herd, which she carefully pastures in the style of Euell Gibbons, and she produces from spring through December or so. One of Ms. Torras's aims is to educate consumers about the seasonality of cheese—herds can't give milk all year, they need time off for reproducing and feeding their young.

Another amazing traditional mountain cheese more people ought to know about, says Palau, is Tupí. This is a creamy, tangy, soft cheese, named for the earthenware dish in which it is fermented and presented. It is the invention of frugal shepherds who grated up finished cheeses that had cracks or other superficial imperfections, added more milk, a shot of aguardiente (either eau de vie or anís), and thistle bloom as a coagulant, then let the stuff ferment for a few months.Tupí is a testiment to the fortitude of mountain shepherds, it being one of those leap-of-faith foods that goes through an unbearably stinky phase before it mellows into deliciousness. Serious cheese seekers might want to note that Eulalia Torras's Tupí took second prize in that category; Baztarrika, a Basque version won first.

Those who can't wait until next year's Fira de Formatge in La Seu to try these wonderful mountain cheeses can wander any time into the town's best cheese shop Formatgeria Casa Eugene, C/Major 58, La Seu d'Urgell, Tel: 973-350-401. Also, come May 1 & 2, Pep Palau's team is putting on another cheese event, "Lactium," in the wonderful market town of Vic. And in September, little Lladó has its own cheese fair. To stay tuned about next year's fest and other important food and wine events in Catalonia and beyond, get yourself on Pep Palau's list by e-mailing newsletter@forumgastronomic.com. Pictured are an array of cow and sheeps' milk cheeses presented at the fair by Mas d'Eroles, with thanks to photographer Xavier Subias.