GMO Food - The Greatest Threat in the History of Western Civilization

Jeff Smith's book, Seeds of Deception, compiles 20 years of data on the health risks of genetically modified foods from scientists such as Arpad Pusztai and Trudy Netherwood who reported that feeding GMO food to laboratory animals resulted in thousands of sick, sterile and dead laboratory animals. The book also reports on allergic reactions and toxicity in humans from GMO foods.

While American consumers remain oblivious, GMO Foods have been introduced into the US food supply without safety testing or even labeling. Already 70% of our US food supply is GMO, affecting corn, soy, cotton seed oil and canola oil.

The British Medical Association has asked for a moratorium on GMO foods.

I Googled GMO to see what the U.S. government says on this subject. It turns out that the Department of Energy (hmm...) has a whole web site about it at http://www.ornl.gov/sci/techresources/Human_Genome/elsi/gmfood.shtml. Aren't they the ones who have done such a great job for us on oil, climate change, etc.? 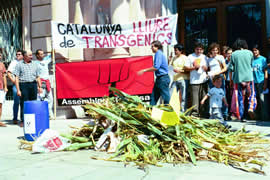 After so many years of romancing food technology, it sounds like the Catalans are getting their feet on the ground again. The incursion of genetically modified corn on an organic farm where local varieties were being grown got people's attention here last year. Then a group of Catalan farmers -- La Assemblea Pagesa de Catalunya -- began to organize in favor of a law banning the production of GMO foods in Catalonia. The first step toward getting such a law considered by the Catalan parliament would be the collection of at least 50,000 signatures on an anti-GMO position statement. Som lo que Sembrem ("We are what we sow") emerged to take up the challenge. On August 20th, they turned in 105,896 citizens' signatures in favor of: - Declaring Catalonia a GMO-free region; - Enacting an immediate ban on transgenic crops; - Requiring clear labels on products which have used GMOs at any stage in their production as well as labeling for non-GMO products; - Imposing a moratorium on GMO development in Catalonia and providing support for research on their effects. The coalition has defined itself broadly as representing the goal of "fair agriculture" not limited to environmentalism but concerned with economic life, health, and nutrition as well. It seems promising that they've brought together farmers, city folks, chefs (including Santi Santamaria), rock-star wine makers (Lluis Llach), and hotshot university scientists in support of their position. A coalition to root for, seems like. I hope my Catalan friends will get involved -- and keep me posted.