What a great, super-informative post! You rightly point out there are many lesser-known cava producers well worth getting to know. Pinot Noir is now an approved variety for white cavas. and the use of the term Cava, really came about with European Union standardization, although its possible to find people in Catalunya who still refer to the local bubbly as Xampany. 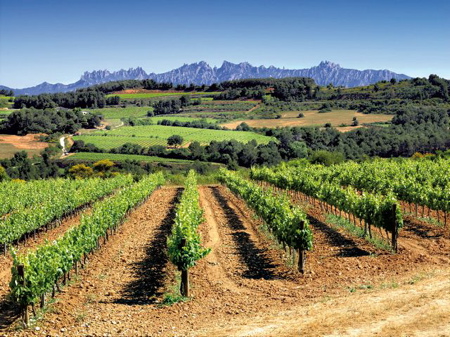 Getting to the Penedés wine country from Barcelona is as easy as last week's New York Times travel section article ("Catalonia's 'Champagne' Country") makes it sound. About an hour's drive gets you to the big-volume producers travel writer Sarah Wildman mentions. What she doesn't offer a clue about is that another half hour and a good map will take you away from the "Disneyesque" Cava touring she describes.

I'll admit, Codorniu does have beautiful architecture going for it in the form of the 1915 bodega designed by Puig i Cadafalch, a contemporary of Gaudí, and, if you go, they'll tell you that their family has been making wine here since the 15th century and that in the 1870s they invented this region's sparkling wine and its traditional production method. But since the Times focuses on these two massively marketed brands, Codorniu and Freixenet—whose black bottle inspires here-comes-the-cheap-wine dread at parties, and says nothing at all about the tasting itself, one might be dubious about bothering with this whole "cava" thing.

Skeptics should know that there are a number of producers who are more focused on quality and artisanship than on reaching the mass market: Llopart, Gramona, Carmenet, Pere Ventura, and Recaredo are among many making lovely bubblies. I also really love Albet i Noya, whose d.o. Penedés still wines are excellent too; they're an old time winemaking family but the younger generation has steered toward organic and biodynamic practices.

The Times's headline, mentioning "Catalonia's 'Champagne,'" is pretty near criminal: Spain's Cava makers have to avoid references to champagne, even in describing their methods—Cava was coined in the 1980s to give an identity to these wines and deal with a longstanding conflict with France on that score. Curious drinkers might discover more pleasure in cava by getting to know it on its own terms. 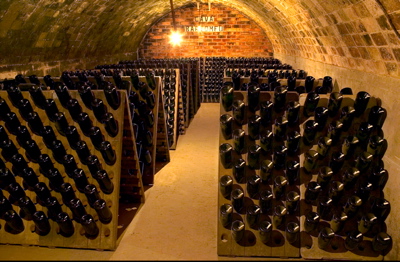 While the traditional sparkling wine methods used to make Cava are quite similar to those used in Champagne, the wine involved here is pretty different. The traditional Cava grapes are macabeo, xarel-lo, and parellada, though a few other varieties, including chardonnay are allowed. These are all white grapes whereas Champagne's trio is pinot noir, pinot meunier, both reds, and chardonnay, so cava is, in effect, a blanc de blancs. Other differences: Cava makers are working with warmer weather crops with plenty of natural sugars and so the method prohibits chaptalization (the addition of sugars to the wine at first fermentation, done in France). In spite of Spain's drier climate, irrigation is also prohibited here (not in France). Old-time Cava-makers add barrel-aged wines at the dosage stage (after the yeast has been disgorged and the bottle gets topped up), whereas more modern producers aim for Champagne's flavor by adding younger wines.

A strange thing about this d.o. is that it's not strictly geographical—the Cava-making capital is Sant Sadurni d'Anoia, but some Cavas are produced up in the Empordà, and a few are made outside Catalonia altogether. Sant Sadurni, is, in fact, smack in the middle of another d.o., the Penedés, but the sparkling wines made by the traditional method are considered part of the d.o. Cava, not the Penedés.

The countryside is arid and hilly, with lovely stretches of vineyard interrupted by industy here and there—the business of winemaking is not hidden in a Disney kingdom here. The town of Sant Sadurni itself is, as Wildman describes it, a dusty place. It's downright ugly, in fact, not a whiff of Sonoma romance. But that's why touring the Penedés, if you get to know the carefully-tended vineyards and the thoughtfully-made wines, and delve into the cool, peaceful underground caves, can leave you all the more wonderstruck.