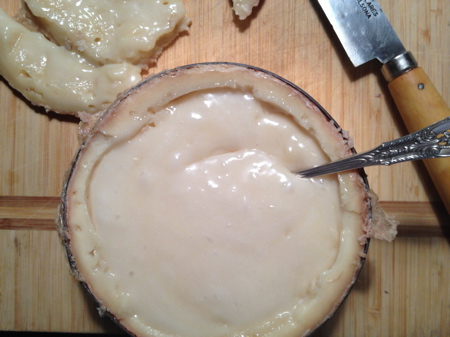 I don't know how it escaped our greedy knives, but there it was at the end of our Extremadura trip last spring: a Torta del Casar. Intact. I packed it into my suitcase and hoped the cold of the airplane baggage compartment would put its sweet stink on hold without killing it.

It was Paul Richardson, the author of A Late Dinner, who put me onto the tortas of the region. They're not cakes, as the name implies, but creamy raw sheep's milk cheeses made from the milk of Merino and Entrefina sheep (known for high quality and scant production).

"You really ought to taste one at Finca Pascualete," Paul said. His story about the farm went like this: in the mid-1940s, the Countess of Romanones set out from Madrid to restore her husband's family estate on this wild western edge of Spain. She took a deep interest in the place, and eventually threw herself into the recovery of artisanal cheesemaking there.

"Oh, and you'll like her," he added. "The Countess started out life as an American, I believe, who came to Spain as a spy."

I wanted to believe this story. Paul is, after all, a respected journalist. And he lives right there in Extremadura. And he probably subscribes to Hola! But I had to ask my friend MJ, who knows everything about everybody who is anybody. Just to be sure. "Oh, of course," said MJ. "I have her book: The Spy Wore Red. Before she married Luís de Figueroa y Pérez de Guzmán el Bueno, the Countess was Aline Griffith, from Pearl River, New York."

Her grandson, Juan Figueroa, runs the creamery now. He opens up the estate to visitors from time to time. And it was there in view of the Countess's beautiful Spanish pottery collection that we had our first unforgettable taste of the estate's Torta de Trujillo. 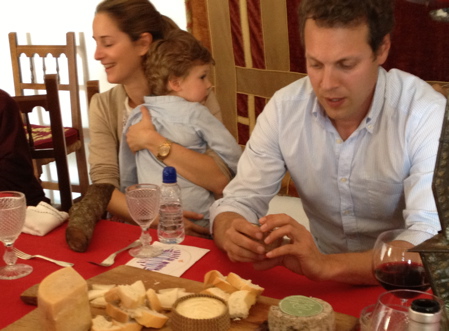 The milk for it comes from the farm's own flock of Extremadura Merinos. And as the denominación de origen stipulates, the curd is set with a vegetable infusion made from wild cardoon thistles, rather than with animal rennet. You eat a torta ripe and runny, cutting off the top of its caramel-colored rind and scooping out its slightly salty, herby, earthy heart with a spoon.

Maybe you should come with us when we go back in May of this coming year. Paul is going to be our guide, and promises to reveal even more about his secret Spain.

Meantime, if you want a nip of torta ASAP, the ladies over at Cowgirl Creamery sell a mini version, complete with the estate's label noting the astonishing history of the place: "Since 1232." 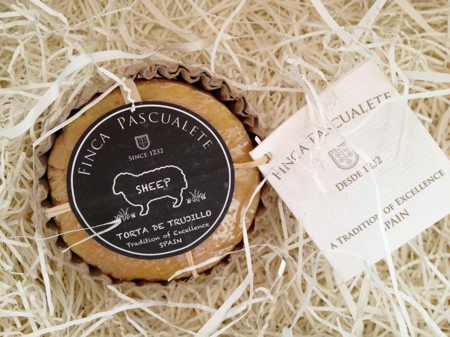