I think a picnic in Ft Tyron Park featuring Mao Cheese Crisps would be a truly meaningful experience. 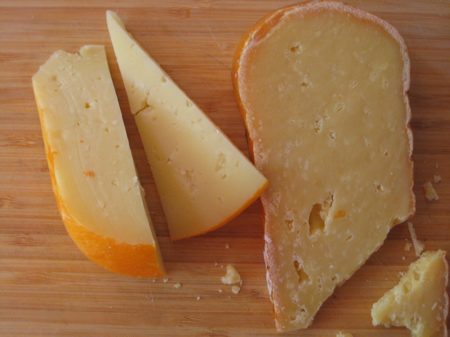 Cows are important on Minorca and have been going way back. Archaeologists have found evidence of cheesemaking on this tiny island dating from 2000BC, and historians say Minorcan cheese crisscrossed the Mediterranean with Moorish and Pisan traders in the Middle Ages. Eaters may be interested to know that you can now buy the good stuff—that is, artisanally-made raw milk Maó de Minorca D.O.P. (complete with the Spanish denominación de origen protegida "Mahón de Menorca")—in the U.S.

This is one of the many cheeses of Spain whose quality is being recovered and rediscovered as it returns from one of those long strange trips down the industrialized path to ordinariness. As one of the country's few cow's milk cheeses, young Maó is mild and milky and melts easily, qualities a cheese industrialist would say make it "versatile." The Mahón I met in Barcelona in the 1980s was made from pasteurized milk and sold young and pale. A rubbery slice yielded an almost-like-home grilled cheese sandwich good enough to get an expat through certain difficult junctures.

A couple of years ago, my friend Vicenç, a chef in the Empordà who is probably fonder of butterfat than any Catalan outside the Pyrenees, told me that Maó was making a comeback. He pulled out a firm, orange-gold, aged piece, and dug a knife into it to show me how it crumbled into shards the way Parmigiano does. It tasted milky, lightly salty and earthy, and a little acidic or maybe lemony, but not anywhere near as piquant as Parmigiano. Viçens uses it to add a creamy finish to his elegant vegetable arrosos (rice grows along the Catalan coast and cooks here don't limit themselves to paellas).

For the cheese to act this way, it's got to be one of the ones classified as artesano. That means made with raw milk that has not been refrigerated or pasteurized; the cheese must be made immediately after milking, while the milk is still warm. These are the ones worth aging. They are rubbed with olive oil and pimentón as they cure, and by the time a cheese reaches the truly "curado" stage (more than five months), the rind is almost brown. I haven't found one that mature in the U.S. Both of the cheeses I bought here were labeled "aged," because they're past the 60-day mark required in both countries for the aging of raw milk cheeses. But in Spain, they would have to be labeled "semi-curado," aged for two to five months.

And the two were pretty different from one another: the one on the left was supple in a younger, milder way while the one on the right was very firm, with a deep orange rind, tangy, and really beginning to take on the complexity of its age. A fluffy pile of Vicenç's aged Maó, finely grated, went into this rich little crisp he taught a bunch of us visitors to make. Vicenç serves it as a crust for his gussied up version of escalivada (a simply dressed warm salad of roasted red peppers, eggplant, and onions; darn, it's covering the crisp in this picture). Cut the dough into smaller squares and you have a great homemade cracker on your hands. Either way, go for the old stuff for this recipe. 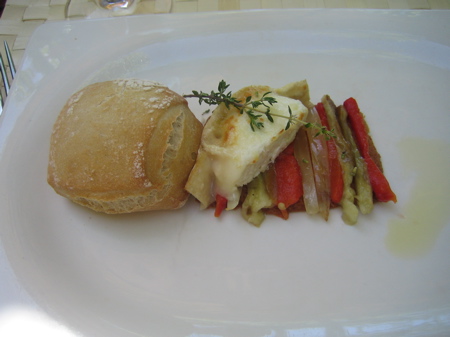 Viçens shapes this dough in a straight-sided loaf pan, then when it's firm he slices neat squares that become his savory crusts. If you're planning to serve these as crackers, cut each square into thirds or just roll the dough into logs and you'll end up with rounds. This is a large recipe and since it freezes well, you can slice and bake as needed.

Makes about 40 individual crusts or 120 crackers.

Combine flour with grated cheese. Cut butter into the mixture, then add beaten egg. Knead gently and briefly just to shape into rectangular or log shape (if you have a straight sided loaf pan, that makes the shaping easy: line the pan with plastic wrap and gently press in the dough... if you don't have the perfect pan, don't fret, just don't overhandle the dough as you shape it). Alternatively, if you're planning to make crackers, roll the dough into logs. Wrap and refrigerate or freeze.

These crusts or crackers are really best baked on the day you're planning to eat them. Thaw the dough in the fridge overnight or at least a few hours so it won't be too hard to slice. You want your slices to be a little slimmer than a quarter inch. Heat the oven to 350 F, slice 'n' bake about 10 minutes until they're just turning golden.

* I bought both of the cheeses in this photo at Whole Foods in Providence, Rhode Island, and Artisanal (online) and Murray's (in New York City) stock it, too.