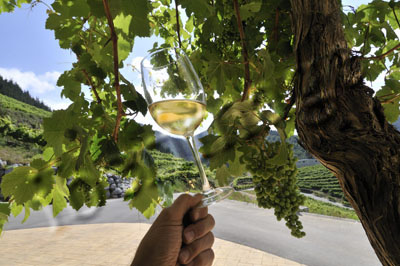 It’s not too late to develop a sensational summer crush. Txakoli is, after all, zesty and light-bodied, yet mouth-filling. What more do you need to know?

Anyway, I've been meaning to introduce you for a while now.

This is the wine of Spain's gorgeously green and amazingly unspoiled Basque coast. And as you'd expect, given its Atlantic terroir, it is perfect for pairing with seafood. There's a slightly saline minerality to it.

Nose in the glass, I don't smell fruit. Professionals say it's all fresh cut hay and white flowers. I like that it's not grassy. The flavors are in the direction of apple and citrus, but at the same time, these wines are light and really dry. We've noticed they're excellent with our zucchini-heavy late summer dinners. 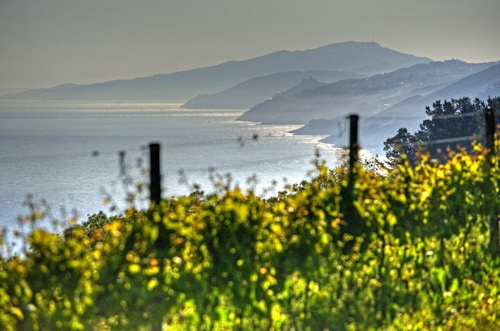 The picture here is of the vineyards at Elkano—where we'll be touring and tasting soon on this fall's "Basque in it" trip—with vines trellised to catch the sea breezes off the Bay of Biscay.

The grape, in this case, is Hondarrabi Zuri. It’s native to the Basque region, and let’s just say the Basques have a unique way with words.

Maybe it’s a good thing wines in Spain are mostly not named for the varietals they feature. Instead, they usually have names that refer to the places they’re created, that is, their “d.o.” (for Denominación de Orígen or what the French call Appellation).

The Txakoli appellation ranges across three distinct growing areas, so there are actually three different denominations: d.o. Txakoli de Bizkaia (Bilbao is in Bizkaia); just east of there is d.o. Txakoli de Getaria and, tucked away inland a bit, d.o. Txakoli de Alava.

But we’re talking about a wine that’s still pretty obscure outside the Basque Country, so just say Txakoli (“cha-ko-LEE”). Or maybe Txakolina (“cha-ko-LEE-na”), if you want to be more Basque about it.

In June, I poured an unusual Txakoli called Maddy for hundreds of downtown wine lovers at the New York Spring Wine Festival. Maddy is a collaborative project of three vineyards, blending grapes selected from coastal and inland parcels. The wine was a huge favorite that night. 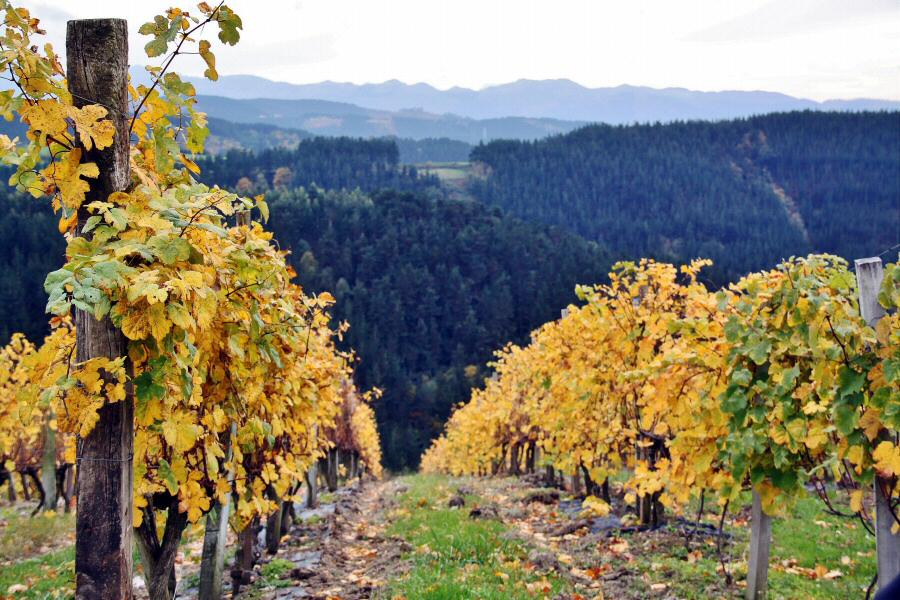 The picture above was taken in the fall at Bodegas Berroja. Maddy is made there, in the Bizkaia denomination where the style is a bit fuller bodied and elegant. It’s a fantastic place. You can see the woodlands of the Urdaibai UNESCO Biosphere Reserve all around and the ocean in the distance.

I’d love for you meet Txakoli in the Basque Country. I think it’s at its best there. When you pack your bags, leave room to bring a couple of bottles home.

Although you can find a few Txakolis in the U.S. now. In June, an Ametzoi made the New York Times’s top summer wines list. And the elegant Maddy is being imported by Classic Wines.

Either way, be prepared for something more than a summer romance. Txakoli has a long and happy relationship in mind.