What a heartening story of people figuring out how to make traditional methods of production pay by finding buyers who appreciate the quality of their product. But I'm also interested in your recipe for recuit. It's quite different from the way ricotta is made in Tuscany. The method is similar but the ingredients are very different. Ricotta is made from the whey left after making cheese. Some people add a tiny amount of whole milk, but traditionalists frown on this practice. Therefore, Tuscan ricotta is virtually fat free. Other differences include adding a little cold water with salt dissolved in it toward the end of the heating, and of course draining it in the typical round baskets (now made of plastic) with sides sloping out from the base. I'm guessing that recuit is denser and richer than ricotta, but I've never tried it. We should organise a comparative tasting!

Heather, there is so much we need to taste together! I would say something like, "Those Tuscans, it's a wonder they survive on their fat-free ricotta and their salt-free bread." But actually, yes, the milk base here, which my cheesemaker friends consider pretty watery stuff, is my friends' suggestion for working at home in the US without the benefit of a supply of whey. Their method is more like what you describe, a procedure for picking up the last bits of fat and proteins after cheesemaking.

I am thinking about those plastic cheese baskets. Same thing is true with those pretty herringbone patterned molds for Spain's manchego cheeses. Used to be woven straw, now embossed plastic. It's kind of unromantic to see, and I wonder if there's something unclean about it. Do you know "The Cheese Nun"? she has been showing the FDA here in the US how wood is better, really more antibacterial, than plastic, for uses such as shelving in cheese caves. She could probably turn the tide and put straw basket makers back in business! If the church is going to run around beatifying people, I think she should be first on the list when her time comes. http://www.newyorker.com/archive/2002/08/19/020819fa_fact_bilger

This cheese sounds fantastic! I'm off to Girona in a few weeks and will have to add this to my list of things to try. 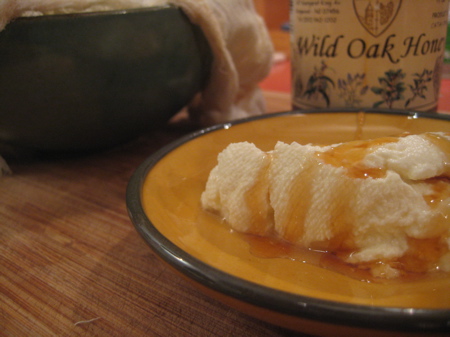 People around the Empordà differ on the subject of who makes the best recuit—the wheyful cheese of Catalonia that's so perfect on a little toast with tomato jam. Or drizzled with honey for dessert.

There are those who like the cow's milk recuit made by Quim, a sweet guy with a roadside stand just outside Fonteta. He makes a good goat's milk version too, and I prefer its tang. Others swear by the recuit––also goat's milk––made by the crotchety Nuri in the village of Ullastret. I'm in their camp.

Despite the inviting cursive of the "Nuri d'Ullastret" sign hanging above her door near the road out of that village, you can pretty much count on Nuri to act annoyed to see you coming. There's something exciting about wresting a little pillow of cheese from her. You tell yourself her attitude is calculated to keep outsiders from scooping up the small batches meant for regulars.

Now there is another recuit in the neighborhood. Made by Manel and Natalia at Formatgeria Mas Marcè, this one is in a class by itself. It is also hard to get because most of the production goes to restaurants. Sometimes they have it at their farm stand in Siurana d'Empordà, near Girona. 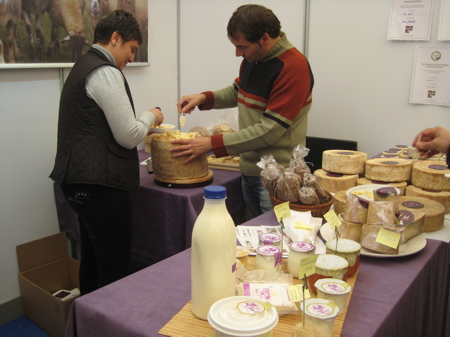 I met them at the region's big cheese show, La Fira de Formatges Artesans del Pirineu in La Seu d'Urgell with some of their prize-winning aged cheeses: El Set is a dense, butter-colored cheese with a natural rind, firm and slightly shardy at two to four months. Llanut is whiter, soft, and melting, eaten just a few weeks old. Manel wraps it in a layer of clean wool—you remove that, of course, before digging in. It makes the cheese just a little sheepish.

But it is their simple recuit de drap that matters in my memory right now. What makes their little cloth-wrapped fresh cheese so unforgettable is fat. Ewe's milk fat. And not from just any ewes. Manel and Natalia are raising Ripollesas—a breed of sheep native to Catalonia, but now so rare they've been put on the Slow Food Ark of Taste for salvation. 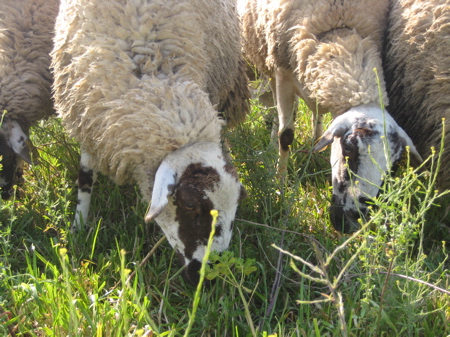 The milk Ripollesas give is much richer than that of other breeds at upwards of 8% milk fat. But hardly anybody raises them because they produce damn little of it: each ewe gives only about 30 liters per year. Meanwhile, Manel tells me, farmers here have gotten used to imported breeds that produce up to 600 liters a year. "You can see why my father, a sixth generation shepherd, who grew up with that level of production, thought ours was a terrible idea." A smile takes over Manel's face as he looks out over the pasture. "That's him out there with the sheep. He works as our shepherd now." 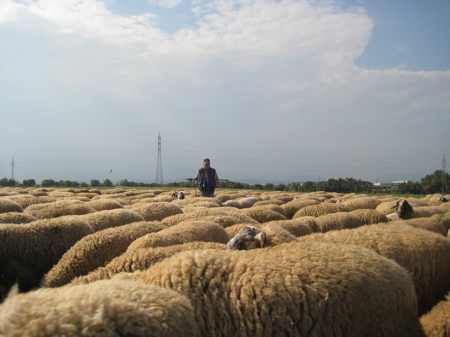 The formatgeria is small, but the family's commitment to it is huge. Besides bringing the Ripollesas back from the edge of extinction, they've brought the land into line with standards for certified organic pasture. While they were at it, they decided to revive another lost tradition: they make their cheese with vegetable rennet. The thistly cardoons they use to produce it grow wild on their land. 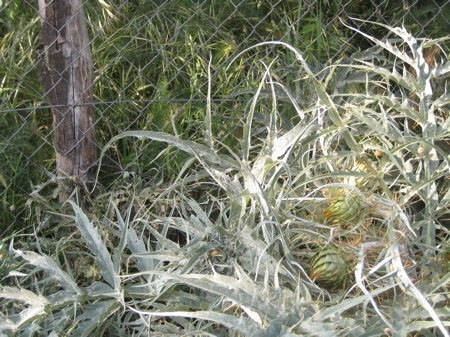 One more thing Manel's dad thought was crazy: Manel and Natalia wanted to bypass large cooperatives—a guaranteed outlet for their milk—and keep everything from grazing to cheesemaking right on the farm. Manel set out looking for customers who would care about their project, taking samples of his milk and cheeses directly to chefs. Sure enough, Ferrán Adrià (mastermind at El Bullí) became a customer for the milk, and Jordi Roca got Mas Marcé to start making yogurt for their Michelin three-star Celler de Can Roca.

The difficulty of getting to those places for my everyday cheese has had me thinking about raising a couple of ewes. Meantime, there's this: if you can get your hands on good buttermilk and whole milk, turning them into a decent homemade version of recuit is only slightly more taxing than boiling water. Manel and Natalia would not approve, but even they would have to admit that this stuff, made with organic cow's milk and no gums or fillers to give it listless water-weight gain, is a hundred times better than store-bought ricotta.

Recuit
Makes about one quart

Warm the milk and the buttermilk, and salt in a pot—an enameled one, pale and weighty is perfect: it never seems to scorch. Slowly heat the mixture, stirring now and then to be sure it isn't sticking on the bottom of the pot. 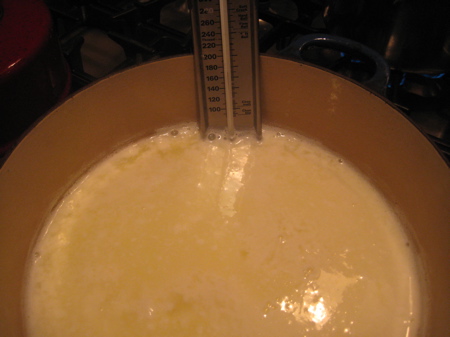 If you're a Catalan countrywoman you probably know by looking just when to turn off the fire. It's not too far south of the boiling point, when the milk is wiggly and threatening to simmer, that you'll see the milk seem to separate a bit, and a few curds begin to form. I use a candy thermometer and this all happens between 170 and 180 degrees F.

As soon as you get the beginnings of curd formation, turn off the heat and stop stirring. It won't look like much at first, but if you keep cooking, the cheese loses its delicate flavor and texture. The recuit will continue to develop as it stands. Let it stand for five minutes.

Line a strainer or colander with four layers of cheesecloth. Be sure you use squares of cloth big enough to allow you to wrap around a quart-sized blob of cheese. Using a skimmer or slotted spoon, scoop the curds into the cheesecloth-lined colander. Keep scooping until all that's left in the pot is the whey and the itty bitty squigles that are hard to catch with your slotted spoon. (Why not just pour the whole mess through? You can. But then your cheese is wetter and takes longer to drain. Instead, use a separate piece of cheesecloth to strain the last bits of curd out of the whey, chill it, and drink it later on. I sense a healthy bottled whey drink craze coming on.)

Now gather up the corners of your cheesecloth and tie it with a piece of kitchen twine or a rubber band. Tie the bundle to your faucet and let it drip into your sink for 20 minutes. Don't let it go much longer or it gets too dry.

This is so good just unwrapped and drizzled with honey while it's still at warm room temperature. But you can leave it wrapped and store it in a shallow bowl for a few days in the fridge, and use it as you would ricotta.